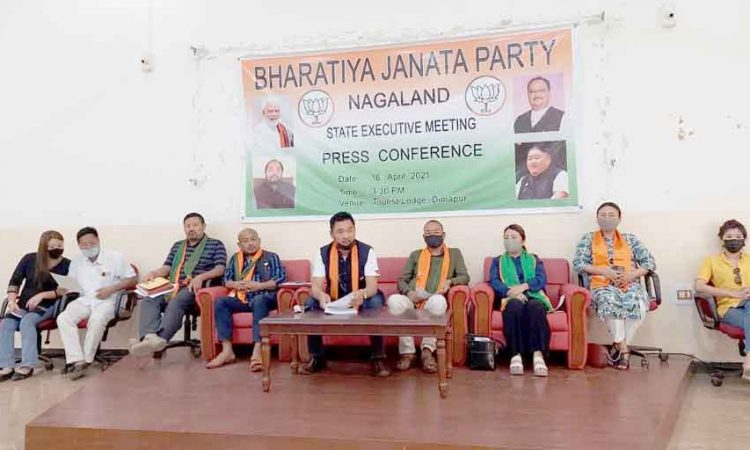 Dimapur, April 16: Bharatiya Janata Party Nagaland will hold its state executive meeting on April 17 at IMC Hall, Dimapur from 8.30 a.m. onwards which would be inaugurated by state president, Temjen Imna Along.

Informing this BJP State General Secretary (Admn), Khevishe Sema said that all state executive members, state council members, district presidents, mandals, special invitees would attend the meeting, besides, 3 central leaders who would join virtually.
During the executive meeting, the BJP is expected to adopt economic and political resolutions, besides discuss on future programmes.
Talking to media persons at Tourist Lodge here, Khevishe highlighted the achievements of the BJP in the country under the leadership of Prime Minister, Narendra Modi.
He said the BJP led Government has introduced the GST, Pradhan Mandri Jan Dhan Yojana, Swachh Bharat Mission, Ayushman Bharat, Ujjwala Yojana, Beti Bachao, Beti Bachao etc for the benefit of the people. He also said that the BJP government has passed the Triple Talak Bill and abolished Article 370 from Jammu & Kashmir.
On the contributions of the BJP in Nagaland, BJP Mahila president said that there has been progress in the state where development projects, road projects were taken up including medical and engineering colleges.
She said some feasible schemes of the Centre has been taken up in Nagaland, adding most of the schemes are being implemented through respective departments.
She also said that different morchas of the state BJP has also created awareness about the programmes and policies of the Central government.
When inquired about the crisis in the BJP with some leaders demanding removal of the state BJP president, Khevishe said that there had been some misunderstanding amongst the party leaders and district presidents, which has been resolved. He said that there is no crisis in the party now.

On the party’s stand on Naga political issue, he said that since the party has a high command in Delhi, whatever decision are taken at the central level, the state BJP follows that. He also said the Naga political issue will be solved by the BJP government. “We don’t have any separate agenda on this issue in the state,” he asserted. (Page News Service)