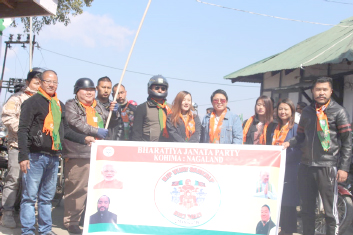 Dimapur, March 3: Nagaland State BJP organized Vijay Sankalp Maha Bike Rally on March 2 in all the districts headquarter. The rally was held across the country to share the achievements of Narendra Modi’s government and to send a message to the mass that BJP believes in all round development.
In Kohima, Temjen Imna Along, State BJP president and Minister of H&TE flagged off the rally while in Dimapur Jacob Zhimomi, Minister PHE and Tovihoto Aye, Advisor, Power participated in the rally.
Earlier on February 28, BJP Nagaland state held its first ever Mandal (constituency) presidents meeting at Hotel Japfu with State president Temjen Imna Along in the presence of 5 State Morcha presidents and 14 districts presidents. 47 Mandal presidents from various districts attended the meeting and endorsed to continue its support and strengthen the party for better growth.
The BJP Nagaland also participated in the recent Prime Minister Narendra Modi’s mega interaction programme, said a State BJP release.
(Page News Service)