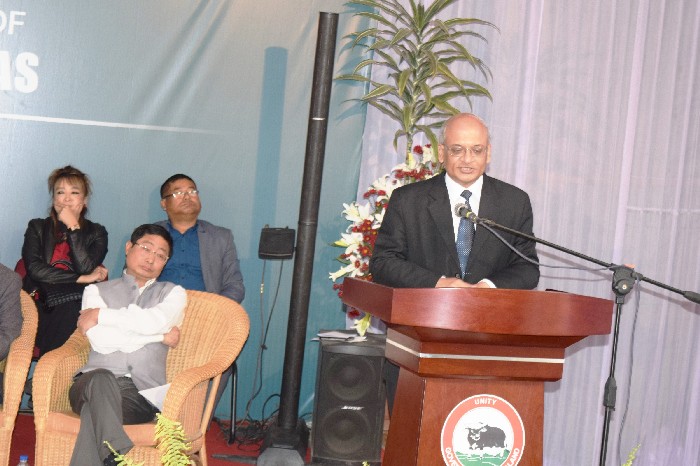 Kohima, March 17: Nagaland today bade adieu to outgoing Chief Secretary, Pankaj Kumar.
Kumar has spent 17 years in different parts of Nagaland – Tuensang, Shamatore, Pfutsero, Mon, Dimapur, Zunheboto and Kohima in different capacities. He was away on deputation but returning in September 2014, Kumar was appointed as the Chief Secretary on March 1, 2015.
Now, he is going back to Dehi as the Additional Secretary in the Union Ministry of Electronics and Information Technology.
He had taken charge as the bureaucratic head of the state during one of the most crucial period and sharing his experience as the Chief Secretary for the past three years, Kumar said “it has been an honour, a rare privilege and also a challenge”.
He said he had no idea that he would be asked to assume the responsibilities of chief secretary of the state when he came back in September 2014 and found himself in the front with Dr. D. K. Bhalla who opted for the post of secretary in Lok Sabha Secretariat.
Recalling the difficult times in the form of agitations and crisis he was confronted with soon after becoming the Chief Secretary, Kumar said March 5 lynching incident at Dimapur, ENSF agitations, several rounds of political instability, agitations by NCSA, RMSA, SSA, Hindi teachers, CANSSEA, PCC etc as a trying time for him and his team.
He, however, recalled the agitation against ULB election as one of the most critical periods for the state, the issue of ‘Solution, not election’ just before the election an event which has tested its mettle and the March 5 incident which has exposed its weakness in crowd control.
While these agitations highlighted unmet aspirations of various interest groups and weaknesses in the governing system, Kumar on a positive note said “we need to learn from them and strengthen governance for the betterment of the society.”
Mentioning some achievements as “unprecedented in the history of the state” that have happened during the journey as well, Kumar informed that the state has got four major Externally Aided Projects – Nagaland Health Project funded by the World Bank, Climate Resistant High farming funded by IFAD, Nagaland Forest management Project funded by JICA and Biodiversity Conservation in Community Conserved Areas.
Highlighting several other achievements made and suggested for improvements on some sectors, Kumar also pointed out some challenges for improving governance like streamlining recruitment, more transparency in awarding contracts, optimal allocation of funds and giving more priority to completion of ongoing projects.
However, he observed that the biggest continuing administrative concern is how to generate more resources for the road, power and water supply, which according to him are higher and tougher peaks, yet to be scaled. Kumar was hopeful that one day the state will be able to scale them.
Meanwhile, the outgoing chief secretary thanked his senior officers and supporting staff for their cooperation and support in the task of governing the state and all the officers and staff of chief secretary’s office who for their tireless and uncomplainingly long hours of work.
“It is only with the combined effort of the administrative hierarchy, from top to bottom, secretary to director to driver and peon, that government works get done,” he said. Kumar also thanked the people of the state for the love, affection and good wishes and sought for forgiveness for any hurt caused to anyone.
The outgoing chief secretary has also assured that as he leaves to take up the new assignment, he will keep the requirements and aspirations of the state in mind.
Additional Chief Secretary & Finance Commissioner, Temjen Toy spoke on behalf of the government while speeches were also delivered by representatives from IAS Association, IPS Association, IFS Association, NCS Association, NPS Association, NSS Association, Asenla Jamir, director SIRD on behalf of directorates, Jamithung, DC Tuensang on behalf of district administration and Grade-IV Association.
(Page News Service)

Benchilo to be new CS; current charge with Temjen Toy

Kohima, March 17: Additional Chief Secretary, R Benchilo Thong will take over as the new Chief Secretary, but due to his ill health, ACS Temjen Toy will take over the responsibility as the chief secretary currently.
“In normal course, my friend and batchmate R.B. Thong would have taken over charge from me. As he is not well, Temjen Toy is going to take over the responsibility,” he said.
Describing Toy as one of the most action oriented, efficient and effective officers of the cadre, Kumar sought whole-hearted and unstinted cooperation to Toy.
(Page News Service)