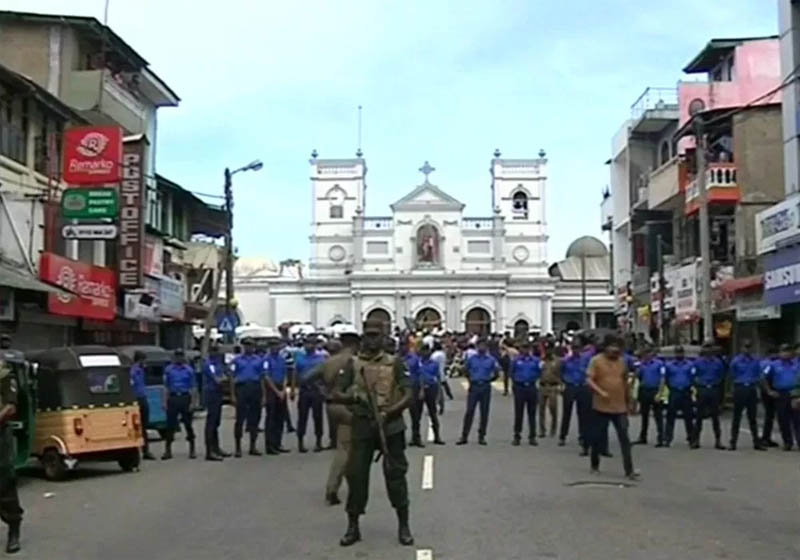 COLOMBO, May 13: Sri Lanka imposed a nationwide night curfew Monday, after anti-Muslim riots spread to at least three districts just north of the capital in a violent new backlash against the Easter suicide bombings.
Official sources said the curfew was aimed at preventing a further escalation of violence, but police would not say why it had been extended across the country of 21 million people.
Initially, the districts of Puttalam, Kurunegala and Gampaha, near Colombo, were told to stay indoors after Christian-led mobs attacked several Muslim-owned businesses and mosques on Sunday and Monday.
“The curfew in the three districts will be lifted at 6.00 am on Tuesday while in the rest of the country, a curfew will be imposed from 9.00 pm (1530 GMT) till 4.00 am (2130 GMT),” police said in a statement.
Police said there were sporadic incidents of mobs throwing stones and torching motorcycles and cars owned by Muslims. In the town of Hettipola, at least three shops were torched.
Police and troops fought off hundreds of rioters in at least six towns earlier Monday with teargas.
“Several shops have been attacked,” a senior police officer told AFP. “When mobs tried to attack mosques, we fired in the air and used tear gas to disperse them.”
“There is a strong political element to the riots today. There are people trying to make political capital out of this situation.”
There were no immediate reports of casualties or arrests, police said.
Earlier, authorities banned Facebook, WhatsApp and other social media platforms after overnight riots gripped several towns in the region including Chilaw.
Christian groups attacked Muslim-owned shops in a sign of the heightened tensions since jihadist suicide bombers attacked three hotels and three churches on April 21 killing 258 people.
Prime Minister Ranil Wickremesinghe urged the public not to believe rumours and warned that civil unrest will stretch the already thinly deployed security forces.
“I appeal to all citizens to remain calm and not be swayed by false information,” Wickremesinghe said on Twitter, which was not targeted in the social media blockade.
“Security forces are working tirelessly to apprehend terrorists and ensure the security of the country, but each time there is civil unrest, we increase their burden and hamper ongoing investigations.”
Mosque Attack
A state of emergency has been in place since the bombings — which ISIS claims to have helped — and security forces have been given sweeping powers to detain suspects.
Police said a mob targeted Muslim-owned shops in Chilaw on Sunday in anger at a Facebook post by a shopkeeper.
“Don’t laugh more, 1 day u will cry,” he wrote, and local Christians took it to be a warning of an impending attack.
The group smashed the man’s shop and vandalised a nearby mosque prompting security forces to fire in the air to disperse the crowd, but the violence spread.
There have already been clashes last week between Christians and Muslims in Negombo, the town north of Colombo that was targeted by the suicide attackers.
The main body of Islamic clerics, the All Ceylon Jamiyyathul Ulama, said there was increased suspicion of Muslims after the Easter Sunday attacks.
“We call upon the members of the Muslim communities to be more patient and guard your actions and avoid unnecessary postings or hosting on social media,” the ACJU said.
Internet service providers said they have been instructed by the telecommunications regulator to block access to Facebook, WhatsApp, YouTube and Instagram.
Schools Reopen
The latest unrest came as Catholic churches resumed public Sunday masses for the first time since the bombings.
Dozens of people have been detained since the Easter Sunday attacks. Amid the heightened security, students are only allowed into schools after checks for explosives.
Public schools completed their reopening after extended Easter holidays, but attendance was extremely low, according to education authorities.
Private Catholic schools were to open on Tuesday, but many plan to stay closed until next week, parent groups said.
Muslims make up around 10 percent of Buddhist-majority Sri Lanka’s 21 million population and Christians about 7.6 percent. (AFP)