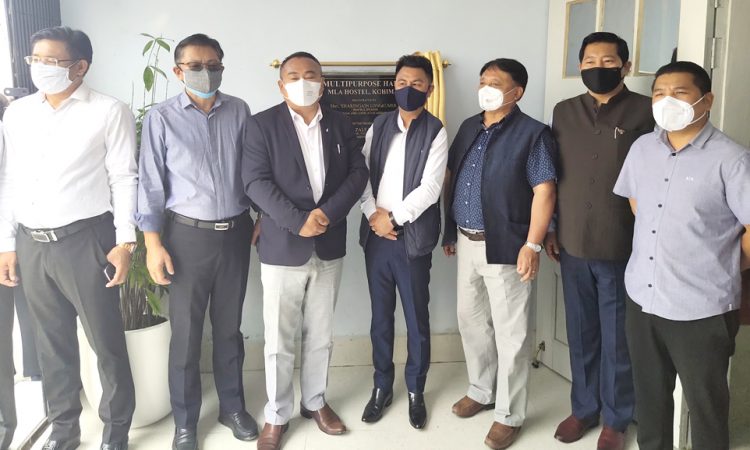 Nagaland Advisor Zale Neikha along with NLA Speaker, Cabinet Ministers, legislators and others pose for lens after inaugurating the Multipurpose Hall at Assembly Secretariat complex on April 29, 2021.

Kohima, April 29: Advisor for Youth Resources and Sports, Zale Neikha today said that sports and games remains one of the main thrust areas of the People’s Democratic Alliance (PDA) government in Nagaland.

“The PDA government, headed by Chief Minister Neiphiu Rio, is committed for promotion of sports and games in Nagaland and remains one of the main thrust areas of the State government,” said Neikha during the inauguration of Multipurpose Hall in the State Assembly complex here.
The present government has strategised sport as an industry and a lucrative profession that provides gainful employment inside and outside the competitive arenas, he said.
Maintaining that Nagas are naturally talented and second to none in the field of games and sports, Neikha asserted that the government is committed to promote sport.
Main features of this strategy will include infrastructure development, game developmental projects from grassroots, capacity building of coaches and trainers, improvement of diet and nutrition, exposure and scientific training of athletes, motivation and reward and career stability for sportspersons.
The Department is currently undertaking five major infrastructure projects under Khelo India, all of which are expected to be completed by next year while more such infrastructures are on the pipeline, he said.
Further, he also announced that with the “huge success” of Synthetic Turf at IG Stadium, the Department is undertaking installation of Synthetic Turfs at Dimapur, Tuensang, Mon and Mokokchung from various schemes of the State and the Centre.
The Department is also very keen to make Multi Disciplinary Sports Centre functional for which the necessary preparation of DPR is at the final stages of submission by the consultant, he said.
With IG Stadium to be established as Khelo India State Centre of Excellence (KISCE), he said talented sportspersons from the State can now have a great opportunity at their doorsteps in further nurturing their talent for competition at the regional, national international level.
Apart from infrastructure, measures are being undertaken by the Department by way of awards to reward and recognize the achievements of our sportspersons, coaches and administrators, he said.

Urging the youths to nurture their talents and exhibit sportsmanship, the Advisor also requested all the stakeholders to cohesively work with the Government for ensuring development in all fronts.
(Page News Service)