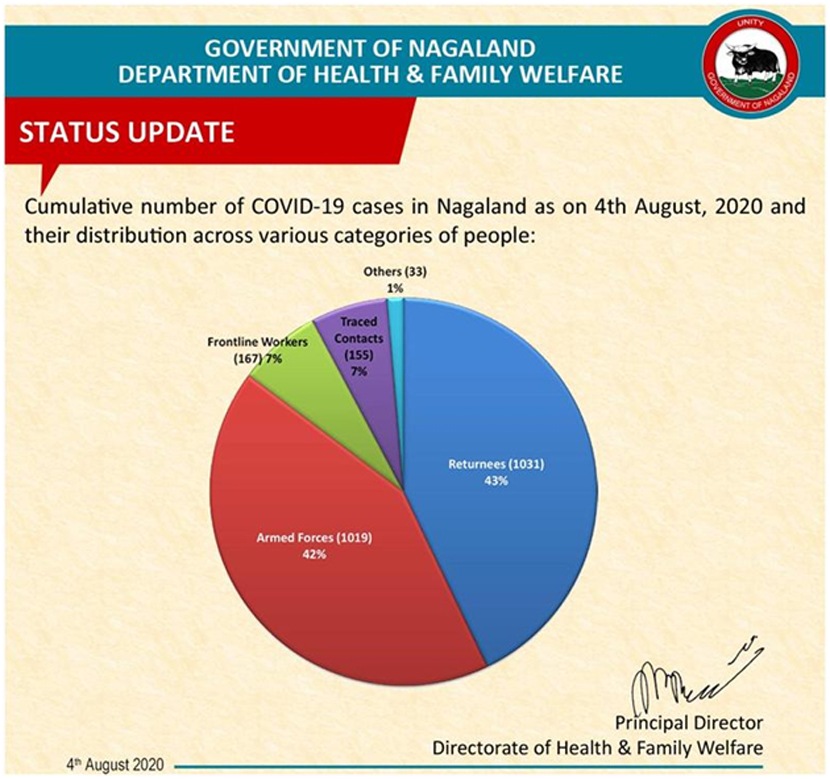 DIMAPUR/KOHIMA, AUGUST 4: The recent spike in COVID-19 cases in Nagaland, creating panic among citizens, can be attributed to rise in the number of cases among army and para-military forces whose movements do not seem to be regulated.
According to the latest figures released by the State Health Department, out of the 2405 COVID-19 positive cases reported so far in the State, more than 80% of the cases are in controlled situation (returnees & Armed Forces in quarantine centre) and 7% are frontline workers.
The State Health Department figures show that the highest number of COVID-19 positive cases in Nagaland has been detected from returnees – 43% of the total cases till August 4 or 1031 positive cases. They are followed closely by the Armed Forces, which accounts for 42% of COVID-19 cases or 1019 positive cases. Frontline workers (167 cases) and traced contacts (155 cases) accounts for 7% each of the total cases, while 1% (33 cases) is attributed to others.
However with the last special train bringing stranded citizens of Nagaland arriving Dimapur on July 9 last, after which not many citizens have returned to the State, the recent surge in COVID-19 cases in the State is due to increase in the number of cases from security forces as per the data made available by Government.
On July 10, a day after the last special train bringing stranded citizens reached Nagaland, the total number of COVID-19 cases in the State was 732, which steadily rose to 878 by July 14 and breached the 1000 mark (1021 cases) on July 20. But within a fortnight, the cases have doubled to cross the 2000 mark by August 3, and on Tuesday (August 4) the tally has reached 2405.
In the last 5 days, Nagaland is reporting over 100 COVID-19 cases daily, with the highest spike in cases coming today (August 4) at 276 new cases. On August 3, the number of cases was 194, August 2 – it was 104 cases and August 1 – 138 cases. On July 31, the number of new cases reported was 127. 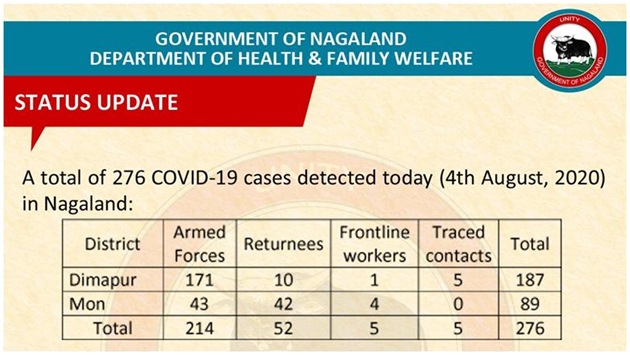 As per data released by the State Health Department, out of the 276 new cases detected today, 241 are from the Armed Forces. On August 3, out of the 194 cases, 113 were from Armed Forces and on August 2, out of the 104 new cases, 69 were from the Armed Forces.
State Government sources said it has already discussed the matter with the security forces so that Standard Operating Procedure (SOP) is strictly maintained during their movements. There are mounting concerns in State Government circles as well as among Armed Forces about possible laxity in implementation of rules in quarantine centres of the Armed Forces.
But sources in Assam Rifles claimed that social distancing is followed strictly by all personnel, including families. Sources claimed that separate barracks with separate eating and toilet facilities have been created to ensure proper segregation of quarantined personnel from others.
Sources said all COVID positive personnel are being treated in their respective unit COVID care hospitals. But this has alarmed the already frightened public.
State Government source said the Government has not officially approached the Union Government for restriction on movement of security forces personnel, but States like Meghalaya and Mizoram have already written to the Central Government to halt movement of security forces in their states.
Mizoram’s MPs have also asked the Centre to halt movement of security forces.
Nagaland Government source said movement of security forces in the State is outside the purview of the State Government, adding that national security issue is beyond the State’s purview.
In Meghalaya, the Government has reportedly regulated the movement of security forces. Border Security Forces (BSF has contributed 50% of positive case and Army and Assam Rifles 59 positive cases).
In Nagaland so far positive cases detected from the armed forces is nearing 1019.
The COVID positive tally is increasing in districts like Zunheboto due to increasing number of cases from armed forces, especially BSF, stationed at Satakha town. So far only 1 case of positive had been detected from one of the returnees.
(Page News Service)