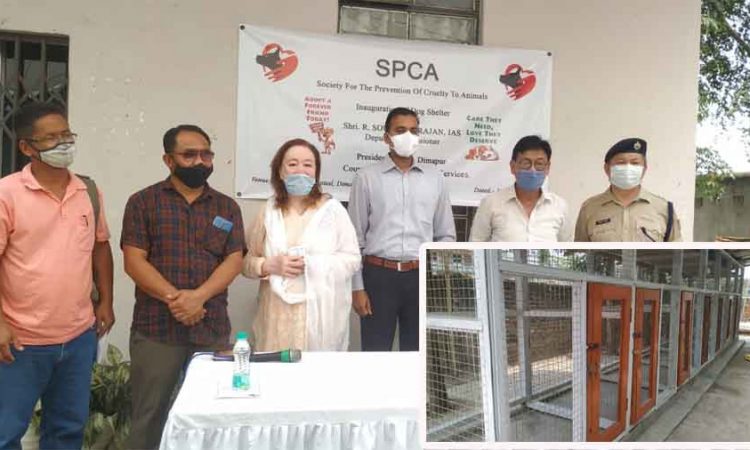 Dimapur, May 1: SPCA Dog Shelter, a first of its kind in Dimapur, was inaugurated on Saturday by DC Dimapur Rajesh Soundararajan who is also the President of the Society for the Prevention of Cruelty to Animals, Dimapur, here at District Veterinary Hospital, Burma Camp, Dimapur.

Speaking on the occasion, the DC said that one of the first tasks that he was entrusted to as he took over as the DC of Dimapur was to find a place for a proposed animal shelter in the district. He said that a proposal has been submitted to the responsible department and sanctions are currently awaited.
Soundararajan credited the executives of the society for the establishment of the shelter, and added that while the present one is only temporary, there is a plan to have a full-fledged animal shelter and he will leave no stone unturned.
According to him, people don’t think about animal cruelty much as awareness here is nil or minimum and there can be witnessed how dogs are transported and sold in the markets.
“The sale might be legal, but not cruelty,” he said and assured awareness campaigns in the days to come. He also mentioned that among the districts where he served, the Dimapur team of SPCA is most proactive.
Vice President of SPCA Dimapur, N. Joseph Lemthur delivering the keynote address gave a brief introduction of SPCA starting from its formation in England in 1824. He said that while the present shed is small and temporary, the team is content and it is just the beginning. He also informed that the present shed was built with donations including cash of Rs 1.5 lakh.
Veterinary surgeon and President of Nagaland Veterinary Union, Dr KN Zubemo Humtsoe in his remark had said that animals should not be seen as “pets” but “companions” and expressed that he wanted the shed to be built near the a veterinary so that experts can look after the animals.
ADCP (Crime) and VP of SPCA Ex-Officio, Relo T. Aye who also spoke on the occasion said that the recent cases have formed a general perception among the people in other parts of the country that Nagaland is not sensitive towards animal rights which isn’t the case. He argued that in the Naga culture never patronized cruelty against any living thing.

The temporary shed which has been erected within the compound of the hospital can house seven dogs at a time.
(Page News Service)