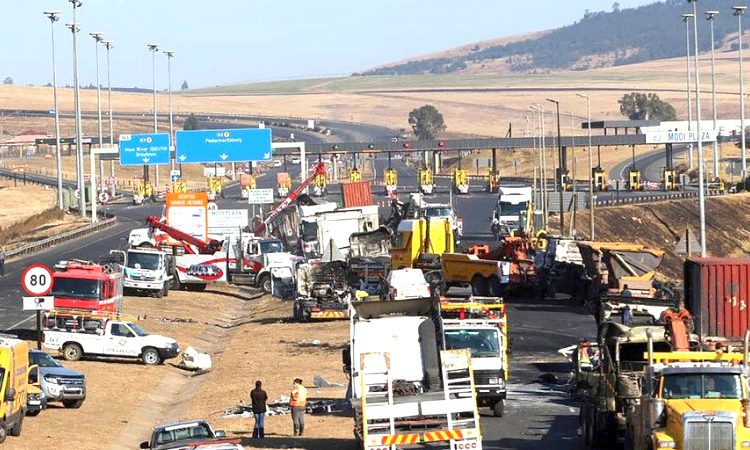 The protesters are demanding that Zuma be released from prison immediately.. (Photo | AP)

Johannesburg, July 12: The South African government is all set to deploy troops to control the violence that has erupted in various parts of the country over the jailing of former president Jacob Zuma for contempt of court.

Initially, soldiers will be deployed in two provinces — Guateng and KwaZulu-Natal, the South African National Defence Force (SANDF) announced on Monday.
KwaZulu-Natal is Zuma’s home province.
Zuma is currently imprisoned in the Estcourt Correctional Centre for failing to obey a court order to testify at a judicial commission that is investigating allegations of corruption during his term as South Africa’s president from 2009 to 2018. The 79-year-old politician, who denies corruption, handed himself in to police on Wednesday last week to begin his 15-month sentence.
Following his arrest, Zuma’s supporters across the country have started demonstrations by blocking roads with burning tires and other obstacles. Shops were looted and buildings set on fire in the violent protests, which also claimed six lives so far.
The SANDF in a statement said it has “commenced with pre-deployment processes and procedures in line with a request for assistance received from the National Joint Operational and Intelligence Structure to assist law enforcement agencies deployed in Gauteng and KwaZulu Natal provinces to quell the unrest that has gripped both the provinces in the last few days”.
The deployment will commence as soon as all deployment processes are in place,” it said.
The SANDF said its mandate is strictly to help keep police safe as they carried out their duties.
The exact number of soldiers who will be deployed has not been announced yet, which the SANDF said would be released after law enforcement agencies have done an assessment of the situation.
Meanwhile, live telecasts on TV channels showed police personnel being outnumbered by the looters, who include both women and children. The video footage showed rioters carrying off huge furniture items from shops and looting pickup vans loaded with goods.
A number of shopping centres in KwaZulu-Natal and Gauteng provinces have been stripped bare as looting goes on unabated. Even heavily fortified automated teller machines have been ripped apart and tens of thousands of currency notes looted.
Major banking group Nedbank has already announced the closure of all its branches across the country.
The violence by Zuma’s supporters has been condemned across the board by the government, the opposition parties and civil society organisations.
They say the supporters are engaging in criminal action in the name of protests about the jailing of the former president.
In an address to the nation on Sunday evening, President Cyril Ramaphosa expressed concerns about the violence being ethnically based.
The South African Chamber of Commerce warned about the huge setback to the economy as the rand began dropping in value.
There is also a major concern that the rioters will become super spreaders of COVID-19 as most of them were not wearing masks. Level 4 of the five-level lockdown regulations was extended for a fortnight by Ramaphosa on Sunday evening in the wake of the exponential rising infections and deaths due to the deadly viral infection.

However, Isobel Frye, Director of Studies In Poverty And Inequality Institute, said the riot is the public’s reaction to unemployment and poverty spilling out in the country. (PTI)