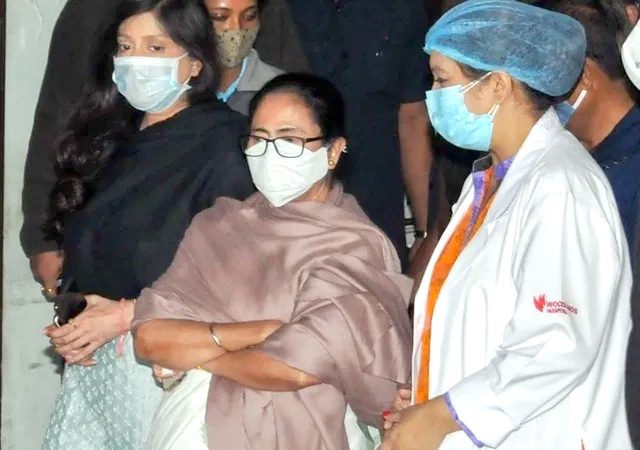 Mamata Banerjee, the chief minister of West Bengal, paid Ganguly a visit in the hospital.

KOLKATA, January 3: BCCI president and former India captain Sourav Ganguly, who underwent angioplasty after a “mild” heart attack, is stable and his health parameters are normal, doctors said on Sunday.
The cricket icon was diagnosed with three blocked coronary arteries on Saturday, following which a stent was inserted in one to remove the blockage.
“He had an uneventful last night and presently Afebrile (not feverish)… He is sleeping now,” a bulletin issued by the private hospital where Ganguly is admitted, said.
His blood pressure is 110/70 and oxygen saturation level is 98 per cent, it said.
Doctors said they will be deciding on conducting another angioplasty after assessing Ganguly’s condition.
To a question, a hospital spokesperson said the medical board is not thinking about the option of bypass surgery.
“Our expert panel will decide about the future course of treatment tomorrow,” he said.
“He has taken breakfast, read newspapers and chatted with the hospital staff in the morning.
A routine ECG was also conducted… His oxygen support has been removed,” one of the doctors treating Ganguly told reporters.
Meanwhile, fans of the celebrated former cricketer were seen holding posters that read ‘Come back dada’ outside the hospital, which saw a beeline of visitors like Saturday.
The batting great was rushed to hospital on Saturday afternoon following complaints of chest pain.

PM Modi speaks to Sourav Ganguly, wishes him speedy recovery
Prime Minister Narendra Modi on Sunday spoke to BCCI president and former Indian cricket team captain Sourav Ganguly who underwent angioplasty after suffering a “mild” heart attack, and enquired about his health.
Official sources said Modi also spoke to the cricket administrator’s wife Dona Ganguly.
Ganguly is admitted to a hospital in Kolkata. The prime minister wished him a speedy recovery.
Ganguly is stable and his health parameters are normal, doctors said on Sunday.
The cricket icon was diagnosed with three blocked coronary arteries on Saturday, following which a stent was inserted in one to remove the blockage. (PTI)