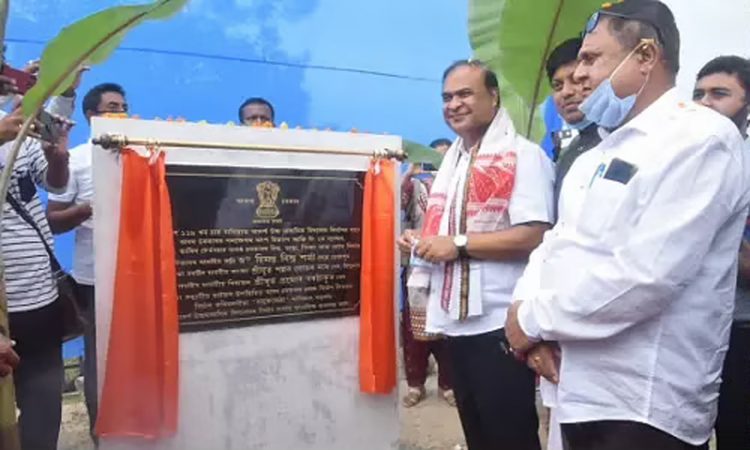 Nazira(Assam), November 1: Assam Chief Minister Sarbananda Sonowal on Sunday said the tea community is an integral part of the greater Assamese society and it has contributed immensely to Assam’s socio-cultural development.
He said this while laying the foundation stone for construction of 119 model high schools at tea gardens of the state at a function here.
Sonowal said the earlier state governments did not take substantial steps for developing the education sector in tea gardens after Independence as a result of which the tea community had lagged behind in social and educational development for all these years.
But since coming to power in 2016, the BJP-led state government has worked for equal development of all sections of the society following Prime Minister Narendra Modi’s motto of “sabka sath, sabka vikash, sabka viswas”, he added.
He called upon the parents in the tea garden areas to motivate their children to take advantage of various schemes launched by the state government for education of the students of the community.
Sonowal highlighted the schemes for the development of tea community such as mobile medical units in tea gardens, construction of roads in more than 800 tea gardens, Chah Bagicha Dhan Puraskar Mela, Rs 25,000 one time financial assistance to tea community youths for self employment, scholarships to meritorious students, wage compensation to pregnant women, smartphones to tea garden sardars.
Paying tributes to martyrs of tea community in the countrys freedom struggle like Mangri Orang, Dayal Das Panika, Biju Baishnab among others, Sonowal said with the historic step of setting up the model high schools in tea gardens the dream of many great personalities of the community would be fulfilled for true development of the tea community.
An amount of Rs 1.20 crore would be spent for building each model high school to be constructed by PWD and a total amount of Rs 142.50 crore has been allotted from State Owned Priority Development (SOPD) fund of 2020-21 for the entire project, government sources said. (PTI)