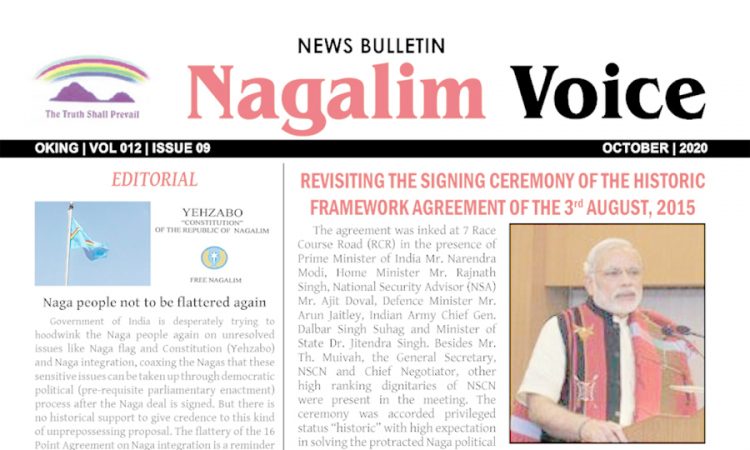 DIMAPUR, OCTOBER 21: The NSCN (IM) has stated that any Naga political groups going ahead for solution without Naga flag and constitution will be seen as committing an act of “historical treachery”.
“This would be seen as committing an act of historical treachery if any Naga political groups go ahead for solution without the Naga flag and constitution,” said an editorial in its monthly mouthpiece Nagalim Voice.
Such a deal will be a ‘sell out’ and a mockery before the world, it stated.
The editorial charged India of desperately trying to hoodwink the Naga people again on unresolved issues like Naga flag and constitution (Yehzabo) and Naga integration. It accused the Government of India of coaxing the Nagas that issues like Naga flag and constitution (Yehzabo) can be taken up through democratic political (pre-requisite parliamentary enactment) process after the Naga deal is signed.
However, the NSCN (IM) stated that there is no historical support to give credence to “this kind of unprepossessing proposal.”
“The flattery of the 16 Point Agreement on Naga integration is a reminder to the Naga people that nothing will matter to India once the Naga solution is signed and any leftover issues will never be allowed to come back to haunt the Government,” it stated. Reminding Naga people to recall the clause in Point 13 of the 16 Point Agreement “Left for future” in the matter of contiguous Naga areas to join the new state of Nagaland, the editorial said with the passage of time this clause was soon forgotten and remains only in paper.
“The flattery should not be allowed to repeat. Moreover, the Naga people are no longer gullible enough to believe something outrageous as this,” it said.
The editorial also expressed dismay that certain Naga political groups along with “a few civil society organizations” are pushing for Naga solution “going down to their knees before the Government of India to accept whatever is vainly negotiated and offered” sans Naga flag and constitution.
The NSCN (IM) alleged that “these groups” have feigned indifference or failed to summon up some logical defense against such entreaties with regard to these contentious issues leaving it for future consideration.
“The historical fact that Naga people have withstood the test of time for more than 70 years under the banner of Naga flag and guided by the constitution should be respected in letter and spirit in order to deliver justice to hundreds of thousands who have sacrificed their lives in defense of Nagas’ political right and identity,” it said.
The NSCN (IM), however, also expressed faith that Modi-led BJP Government will live up to the spirit of Framework Agreement by honouring Naga flag and constitution to undo the past mistakes.
“History will also honour Prime Minister Mr. Narendra Modi for his judicious decision. For the people who tamely submitted to the cajoling of RN Ravi on the non-negotiable issues of Naga flag and constitution on the pretext of following up the issues post signing of the solution through democratic process, Naga History will not forgive them but taunt them,” it added.
(Page News Service) 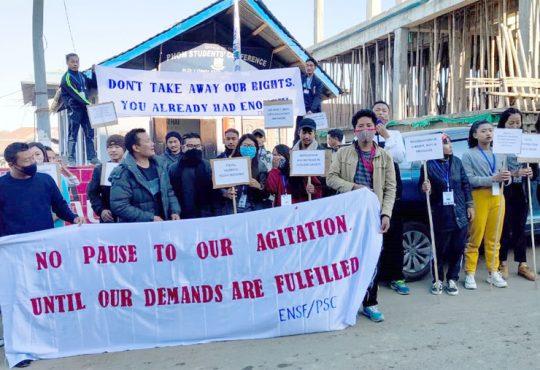