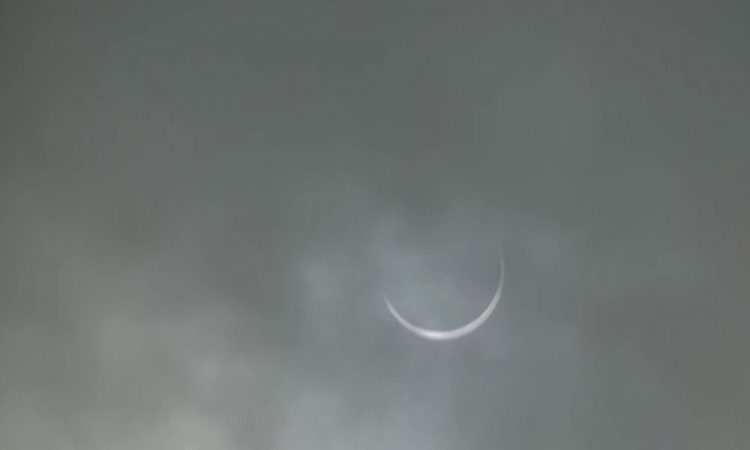 New Delhi/Kurukshetra, June 21: The sun appeared as a ring of fire on Sunday in an annular solar eclipse, fascinating skygazers in parts of India but disappointing many for whom the celestial event was obscured by cloudy skies.
Across a narrow belt which included parts of Rajasthan, Haryana and Uttarakhand, the eclipse was annular or ring-shaped. In other parts of the country, it was the more common partial solar eclipse.
Reports of weather playing spoilsport came in from several places, where people expected a partial eclipse or the ring-of-fire phenomenon, this time coinciding with the summer solstice, the longest day of the year.
Delhi teacher Harpreet Kaur, who is the coordinator of the science club at her school, was somewhat disappointed.
“I could not see the eclipse properly due to the clouds,” she said. But she took some pictures and videos she will share with her students on the school’s WhatsApp group.
Solar eclipses occur when the moon casts its shadow on the sun. In an annular eclipse, the three bodies are aligned in a manner that the sun appears only as a slim circle of light for a while.
The eclipse, beginning and ending with a partial phase, lasted from 9.16 am to 3.04 pm, across regions.
Apart from the weather, social distancing norms imposed due to the coronavirus pandemic too marred the experience.
The Gujarat Council on Science and Technology (GUJCOST) scaled down its plans, one among several science bodies across the country to do so.
“No big event was organised due to the COVID-19 pandemic. But to provide a glimpse of the eclipse, we arranged a limited programme at GUJCOST office in Gandhinagar with telescopes, pinhole cameras and solar filters for students and enthusiasts,” Narottam Sahoo, an advisor at GUJCOST, said.
But enthusiasts, equipped with protective eye gear, gathered on the terraces and in other open spaces to take a look as the moon cast its shadow over the sun. Many watched the phenomenon live-streamed online.
At one point, it seemed dusk had set in and birds began chirping.
Prominent temples closed down before the eclipse. In Uttarakhand, the Chardham shrines of Badrinath, Kedarnath, Gangotri and Yamunotri closed at 10.30 the previous night.
They reopened for prayers only after the eclipse was over at 2.30 pm on Sunday.
In Haryana’s Kurukshetra, about 200 priests gathered around the sacred Brahma Sarovar chanted from the scriptures as the eclipse progressed.
Usually during solar eclipses, lakhs of people gather in the holy city for a dip in the sarovar’. This time the administration had imposed a curfew, allowing only small-scale rituals.
The traditional fair was also not allowed because of social distancing norms to be followed to contain coronavirus.
Some scientists were also allowed to observe the eclipse in Kurukshetra. Arvind Ranade, a scientist with the Department of Science and Technology, was among those who travelled there.
“We could see the eclipse clearly, especially the Baily’s beads,” Ranade said.
Named after English astronomer Francis Baily, Baily’s beads are an arc of bright spots seen during total and annular eclipses of the sun.
Apart from Kurukshetra, Dehradun, Chamoli, Joshimath, Sirsa and Suratgarh were some of the towns on the annular eclipse path where the ring of fire around the sun could be seen if the weather permitted.
The annular path also passed through parts of Congo, Sudan, Ethiopia, Yemen, Saudi Arabia, Oman, Pakistan, and China.
The next annular eclipse will be seen in South America in December. Another annular eclipse will occur in 2022, but will be hardly visible from India, according to N Rathnashree, Director of the Nehru Planetarium in Delhi. (PTI)