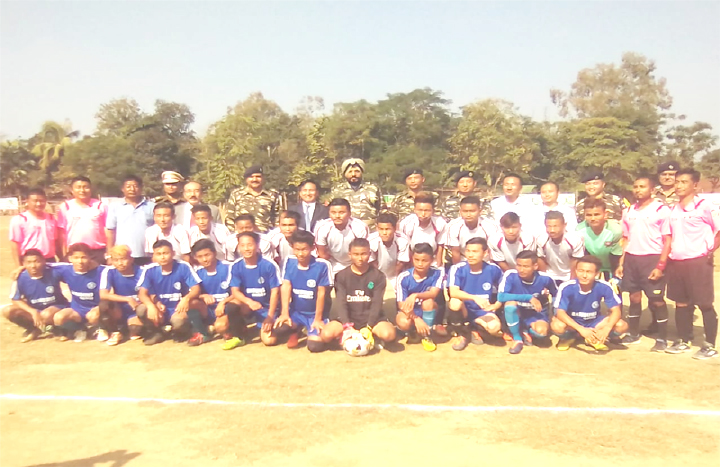 Dimapur, November 26: The 5-day football tournament organized by 173 Bn. Central Reserve Police Force (CRPF) in collaboration with Diphupar Naga Students’ Union is underway here at Diphupar Village local ground.
On Monday, the tournament was declared open by Sarbjit Singh, DIG (OPS) Kma, in the absence of Minister PHED N. Jacob Zhimomi as the special guest.
Speaking on the occasion, Singh asked the participants to give their best and reminded them that if they are good enough, they stand a change of getting recruited among the 350 posts vacant for sportsperson for which a nationwide recruitment drive is going on.
Acknowledging the involvement of the DNSU and Diphupar Village, he said that the tournament is a part of CRPF’s Civic Action Programme and under the programme, different activities are carried out by it to promote closer relationships between the security personals and civilians all over the country.
Later, speaking to the media, he said that under CAP, CRPF has been carrying out many activities in the state which includes distribution of free books, solar lights etc. and is very much concerned about the welfare of the school students in particular as they are the future of the nation.
“We want to do all we can for the students to achieve their goals,” he said, adding that the activities are bearing positive results already.
Ghuzui Shohe, Chairman of Diphupar Village Council in his address had called the tournament an endeavor to build relationships and asked the players to play with mutual understanding and let peace and understanding prevail.
16 teams are participating in the maiden edition of the tournament which will conclude on November 30.
Results:
First match:
Naga United-0; Ikeshe-00
Second match:
FC young Brothers-01; Koza Brothers-05
Third match:
JN Aier College -00; Diphupar ‘B’ FC -04
(Page News Service)