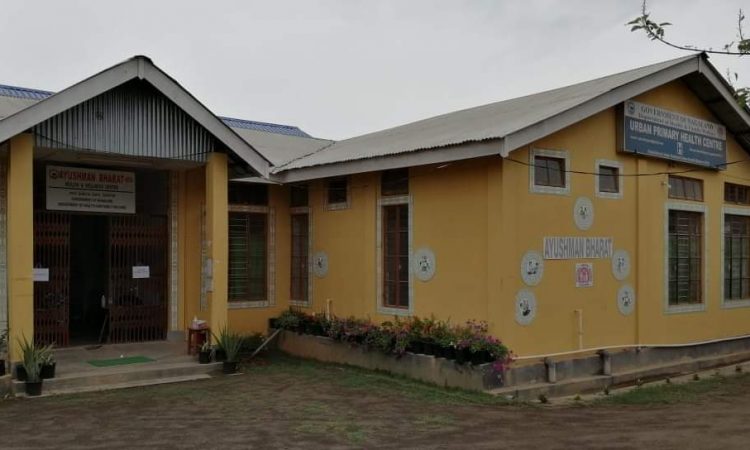 Temjenrenba Anichar
DIMAPUR, MAY 15: A ringside view and a WhatsApp group. These are the unlikely combination of factors that have persuaded the unlocking of public goodwill in these dark times.

Of all the sentences that crackle through the phone like slow bursts of gunfire, one stands out. “Aru cleanliness toh kobole he nai“, she says. Six words of measured judgment that comes from having seen things from proximity.
Mhabeni Shitiri lives right next to the Urban Primary Health Centre at Duncan Basti in Dimapur. And for years now, she has been an inadvertent witness to the functioning of the neighbourhood health facility.
“I also avail the services there, sometimes. After the present Doctor (Medical Officer) came, there has been so much improvement here,” she tells Nagaland Page.
“She (the Doctor) is really one of a kind, so dedicated to her work. Sometimes I have seen her arrive at the PHC early morning and sweep the compound,” says Mhabeni.
The lab technicians and nurses are all “very sincere”, she adds. And then says, “Aru cleanliness toh kobole he nai“.
According to her, the residents of Duncan Basti as well as those who had come to get vaccinated at the Centre were left impressed by the way it is being run. “Especially, by how clean it is,” she adds.
This impressive functioning of the PHC ~ a verdict rarely associated with Government institutions in Nagaland ~ has in turn triggered a sense of gratitude and goodwill among the citizens.
“We just want to help them, to show that we are grateful to them,” shares Mhabeni. She is quick to emphasise that it doesn’t mean the Government is not helping or looking after the Duncan PHC.

So, she shared the idea of extending help to the PHC in an all-women WhatsApp group by the name of Soul Sisters. She had formed the group with a few like-minded women, including some who are “renowned in their fields”, she adds.
“They were all willing to help. So we made a poster asking people to contribute or donate stuff. As far as possible, we are discouraging cash donation,” she shares.
Initially, the target was to help Duncan PHC only, but the project now has been expanded to include ‘COVID-19 vaccine designated health centres’.
According to their poster, items that can be donated include hand sanitiser dispensers (wall mount), body sanitiser machine, thermal scanners, PPE kits, gloves, masks, face shields, disinfectants, water filters, tarpaulins, chairs, and refreshments.
“Your kindness can save lives…Together we can stop the spread,” their message on the poster reads.
As is the wont in social media, some people have taken to criticising the women group’s initiative.
“They are saying that the Government should do it. Yes, but why can’t we also contribute? Every one of us is part of the State. We cannot simply depend on the Government. Seeing the sincerity and dedication of the PHC staff, as responsible citizens, we want to do something about it,” says Mhabeni.
Despite the online criticisms, the response from those willing to help has been “very good”, she shares.
“Many people are calling me (her mobile number is provided in the poster) saying that they want to give this and that. Even some Government officials have called to say that they are willing to contribute,” she says.

This initiative was started during the vaccination phase for those aged 45 and above. “Now that vaccination for 18 years and above has also started, things are going to get even more hectic,” she points out.
And then she returns to her earlier assertion: “Our little help can save lives and we are in such times that as citizens of the State, we should not only criticise the Government but show our support in order to fight these hard times together and be a hope for people in need.”