HomeSportsSindhu, Srikanth, Prannoy through to second round of Japan Open
Sports
3 years agoSeptember 11, 2018No tags 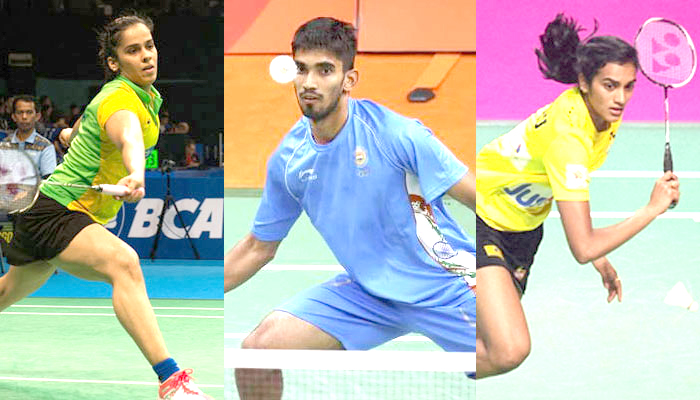 TOKYO, September 11: Ace Indian shuttler PV Sindhu had to toil hard even as Kidambi Srikanth and HS Prannoy scored easy victories to progress to the second round of their respective events at the Japan Open, on Tuesday.
Third seed Sindhu had to sweat it out for 53 minutes before prevailing 21-17, 7-21, 21-13 over unseeded local girl Sayaka Takahashi in her women’s singles opening round.
Sindhu will next play Chinese Fangjie Gao, who defeated the other Indian in fray Jakka Vaishnavi Reddy 21-10, 21-8.
Having finished second-best yet again with a historic silver in the Asian Games, Olympic medallist Sindhu would be desperate to break the final jinx here.
Sindhu has been outstanding with silver medals in all the major events this year – the Commonwealth Games, the World Championship and the Asian Games but the gold has been eluding the Indian for a while now.
In men’s singles, Prannoy defeated current Asian Games gold medallist Jonathan Christie of Indonesia 21-18, 21-17 while Srikanth got the better of Chinese Yuxiang Huang 21-13, 21-15 in another first round match.
While Prannoy will be up against Anthony Sinisuka Ginting of Indonesia in the second round, Srikanth will take on Vincent Wong Wing Ki of Hong Kong.
Both Srikanth and Prannoy had suffered shock defeats in the second round of the Asian Games and the duo would be desperate to make amends.
However, it was curtains for another Indian, Sameer Verma, who fought hard before going down 18-21, 22-20, 10-21 in another men’s singles opening round encounter.
Meanwhile, it was a mixed outing for the Indian mixed doubles pairs as Satwiksairak Rankireddy and Ashwini Ponappa crashed out in the opening round even as the combination of Pranaav Jerry Chopra and N Sikki Reddy sailed into the next round.
Ranikireddy and Ponappa were shown the door by second seeds Yilyu Wang and Dongping Huang of China 13-21, 17-21, while Chopra and Reddy stormed into the second round with a 21-9, 21-6 victory over Malaysian duo of Mathew Fogarty and Isabel Zhong.
Chopra and Reddy will face another Malaysian combination of Peng Soon Chang and Liu Ying Goh in the next round. (PTI)