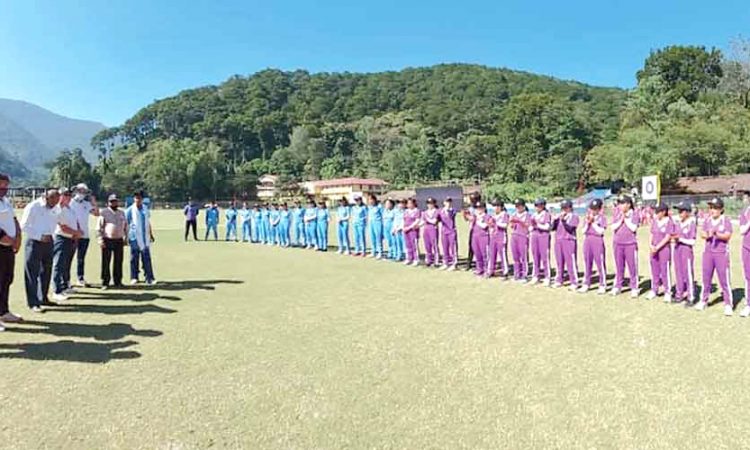 SILIGURI, NOVEMBER 12: The inaugural edition of Khangchendzonga Shield, Sikkim’s first women’s cricket tournament organised by the Sikkim Cricket Assoication (SiCA), got underway at the Sikkim Cricket Ground (SiCA) near Rangpo on Wednesday with a double header.
In the first match of the T20 tournament, Mount Kabru easily defeated Mount Simvo by 8 wickets. Batting first, the Simvos were restricted to a modest 73 in their 20 overs, which the Kabrus overhauled for the loss of just 2 wickets.
In the second match, Mount Pandim defeated Mount Sinolchu by a similar margin of 8 wickets. The Pandims made an easy job of chasing Sinolchu’s paltry score of 70.
The 4 teams will play a match each against each other over 3 days, and the top 2 will clash in the final slated for November 21. In all, 64 cricketers are taking part in the tournament aimed at promoting cricket among women of the soccer-mad Himalayan state.
“Historically, Sikkim has never had a cricket tournament solely dedicated to women. This step will serve as a platform for young women to showcase their talent and encourage more participation in the sport in the future,” said Lobzang G Tenzing, SiCA president.
The tourney was preceded by a 3-day coaching camp, conducted by the Board of Control for Cricket in India (BCCI)’s coach Atul Gaikwad.
Seema Gurung, a player from Soreng-Chakung in West Sikkim, said she was excited to be part of both the coaching camp and the tournament.
“We really enjoyed the coaching by Atul Sir. Unlike in the past when we had to go outside the state for training, it was nice to train in our own home ground this time,” Seema said.
The Sikkim Cricket Ground (formerly Mining Ground) is hosting the first tournament after its development as the state’s only cricket-dedicated stadium.
In its earlier avatar, the venue used to host multiple events, including political rallies and other jamborees. After SiCA was granted an extended lease of the ground by the previous Government, the BCCI has funded its development as a cricket stadium.
In the first phase of development at an approximate cost of Rs 2 crore, the entire ground has been re-laid. “Nine pitches have also been set up in the middle of the ground and 8 practice pitches along the sides. The ground has a proper drainage system and the entire playing arena has been fenced,” said Roshan Gupta, a SiCA member. (Courtesy: TT)