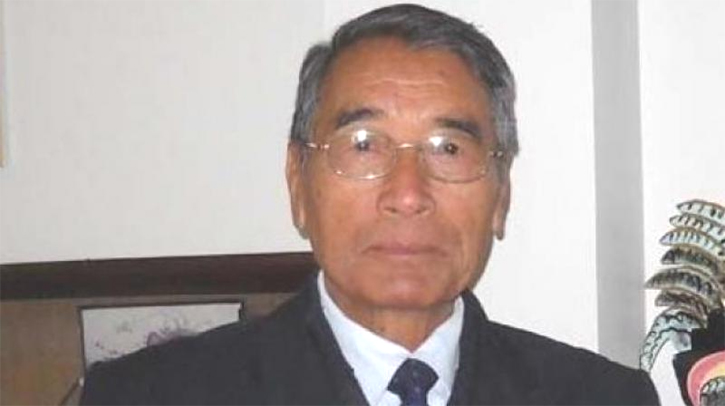 ‘Extortion has nothing to do with Naga political problem’
Dimapur, July 5: Naga People’s Front (NPF) president Dr Shürhozelie Liezietsu has stated that extortion has nothing to do with the Naga political problem and it is purely a law and order subject.
“Extortion has got nothing to do with Naga political problem. Extortion is purely a law and order subject. I hope no organization will support it. I do not mean to advise others but it will be good for record if we differentiate properly what is right and what is wrong. There is no justification for extortion and this is one main point in the Governor’s letter,” he said in a statement.
Presenting his observations on the Governor’s June 16 letter to the Chief Minister, Shürhozelie said the Governor’s letter to the Chief Minister should not be a surprise to the people of Nagaland, and to the Chief Minister either because the Governor has urged the CM to take some action to contain law and order situation as early as 23rd August 2019. The State Government was reminded again on the gravity of the situation on 14th November 2019. “But nothing has been done. Therefore, the Governor has regretted to say that his urging and advices have gone unheeded,” he said.
On some organizations attacking the Governor for using the word ‘armed gang’ in his letter; Shürhozelie asked, “But why we ourselves are trying to interpret the phrase to let our national workers own it? Or why some underground groups come out to own that phrase by themselves? Let us not mix up the Naga political problem and the failures of the present PDA Government in Nagaland.”
Reminding that the NPF secretary general, Achumbemo Kikon, while participating in the North East TV debate on June 30 made the party’s views very clear that the Nagaland Government or for that matter the Chief Minister should step down on moral ground when law and order in the State has been declared collapsed by the Governor, Shürhozelie said, “We will go one more step further that this Government has failed in all fronts including management and the economy of the State. It may not be necessary for us to go into detail at the moment. But we will be prepared point by point if we are invited to do so.”
Highlighting some recent statements issued by concerned citizens of Nagaland, as examples, to understand the mood of the people of Nagaland, he said the Dimapur Chamber of Commerce & Industry (DCCI) in their statement dated 23rd June 2020 had accused “some Naga Political Group (NNPG) and their elements of forceful imposition and collecting taxes from shops and business establishments.” The DCCI describes the act as “an extreme form of taxation that would surely sound the death knell of the business community,” he said.
On the same day, Shürhozelie said the Tutomi Gham Kughakulu Dimapur (TGKD) also condemned the unlawful act of threat and intimidation meted to one officer by an outfit of the UGs. PAC through its media cell had also expressed utter disgust and pain and strongly condemned the excessive spree of ‘illegal multiple taxation on Dimapur traders by NNPG, and alleged that the State Government silence only revealed incapability, complacency or complicity with these elements.
“This is the condition of Dimapur traders. Dimapur is the commercial hub of Nagaland. Every town in Nagaland buys commodities wholesale from Dimapur and brings it home for retail sale. Therefore, when Dimapur price go up, it affects all other towns simultaneously. The public of Nagaland are indirectly paying those taxes through the Dimapur traders,” he said.
“But if any one claims that collection of tax is legal, I will not go further with single track minded argument. But taxes also may have different categories, one cannot just blindly say that all taxes are legal. How many sovereignty Naga people aimed at? People support ACUAT when they advocate “One Govt., one tax,” Shürhozelie stated.
Observing that the Governor had written the letter to the CM dwelling on the failures of the present Government in Nagaland, Shürhozelie maintained that as Constitutional head of the State the Governor has responsibilities.
“On the whole, Governor writes this letter for the sake of the suffering public and not for his own gain or interest. This much I would say now but as state earlier, if I am invited to go further I will be happy to do that,” he added. (Page News Service)