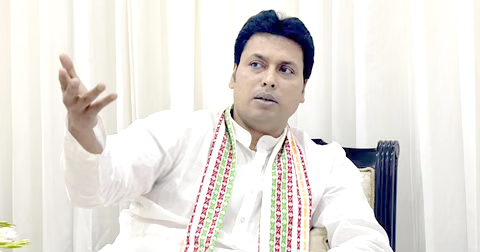 Agartala, December 8: In a rather dramatic move, Tripura chief minister Biplab Deb on Tuesday said he would leave the CM’s chair if people want him to. His comments came two days after a group of Bharatiya Janata Party (BJP) supporters raised slogans against him and chanted ‘Biplab Hatao, BJP Bachao’ (remove Biplab, save BJP) during a visit of party’s central observer Vinod Sonkar to the state.
Biplab, who was considered a greenhorn in state politics at the time of his return in Tripura in 2015 as leader of Mahasampark Abhiyan – a political campaign to connect with people in the erstwhile Left Front era, roped in Indigenous Peoples Front of Tripura (IPFT), a tribal political party and jointly decimated CPI(M)-led Left Front’s 25 year-long rule, winning 44 out of 60 seats in the assembly.
However, a year after his government was formed, his health minister Sudip Roy Barman, who had joined from the Congress, was dropped from the state cabinet, allegedly due to some sort of clash between the two leaders. In November, a group of dissident BJP legislators, led by Roy Barman, reached out to BJP president JP Nadda in New Delhi. While the visit was touted as an effort to remove Biplab from his position, the visiting leaders later clarified that they went to discuss ‘organizational issues’.
Two days back when BJP observer Vinod Sonkar was in Tripura during his maiden visit as state in-charge, a group of BJP supporters raised slogans ‘Biplab Hatao, BJP Bachao’ at the State Guest House, where he was staying. The controversy was soon doused by Sonkar, who claimed that people came to speak their mind since a BJP observer was appointed for Tripura after a long time.
On Friday, CM Biplab Deb held a press conference at the state secretariat and said he would happily leave the CM’s post if people of Tripura wished so.
“I want people of Tripura to tell me if they want me removed. I shall go to Astabal Maidan on December 13 at 2 pm. I invite everyone to join me there and tell me whether I should go or stay. If you wish me to go, I shall abide by your wish and tell my party high-command that people of Tripura wanted this,” Deb said.
He also said, ON a rather emotional note, that he always worked for Tripura with what he calls ‘Modi Mantra’. However, he said it pained him to hear people raise slogans to remove him.
“I wish to work for everyone, across religions, castes, colours or other identities. This state gave me everything, even those beyond my dreams. I never dreamt of becoming the chief minister at the first place. But, some people raised slogans of ‘Biplab Hatao, Tripura Bachao’ the other day. It pained me very much. So, I want to know if everyone feels the same way. If yes, I shall leave,” he said, throwing an open challenge to his opponents within the party.
He also claimed his government has achieved considerable development in last three years including HIRA, HIRA Plus, educational development, infrastructure development, Special Economic Zone (SEZ) Integrated Check Post (ICP) with Bangladesh, Logistics Hub, high-rise buildings, smart city, new airport, agricultural growth, among others.
HIRA is an acronym Prime Minister Narendra Modi coined during his tour in Tripura before the 2018 state assembly elections. It stands for Highways, I-ways, Roadways and Airways – something PM Modi promised for Tripura if BJP was voted to power.
Stating that his only passion is to transform Tripura into the best state of country, Biplab Deb said his government is focusing on growing job creators, developing entrepreneurship and creating government jobs.
However, he warned that if he stayed back in power, he would not tolerate any illegal activities and would follow a zero-tolerance policy on crimes.
“If someone wishes to engage in mafiagiri, hooliganism, illegal land brokerage business, I shall never compromise. I hereby iterate that I shall not engage in any illegal activities, nor shall I allow anyone to do so, like drug trade of phensidyle, yaba or such,” he said.
Deb also asked people to decide for him about what might be done to people who raised slogans against him. (Courtesy: HT)