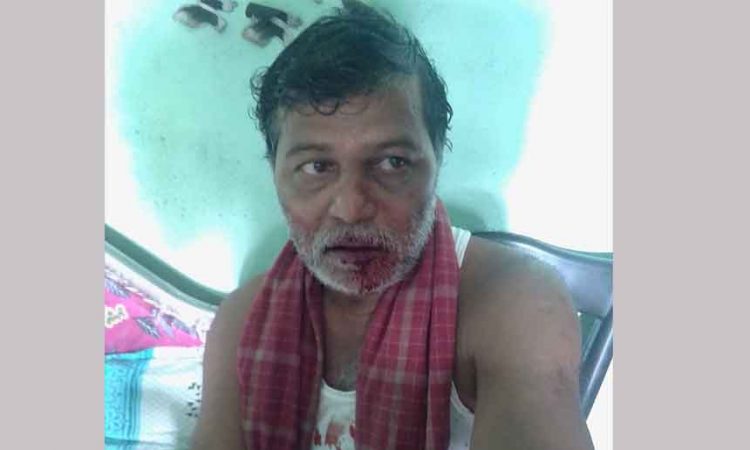 Dimapur, May 16: A shopkeeper at Dimapur’s Chatteshwary Colony of West Yard area was physically assaulted on Sunday afternoon by two unidentified miscreants, allegedly without any provocation.

The victim, identified as Anil Roy, told Nagaland Page that at around 1:30 pm, two persons entered the building where he stays along with his family and asked him for water.
According to Roy, one of his rented rooms was attached to his shop on the side of the road, while another was on the first floor. Prior to the arrival of the two persons, he had taken a bath and was intending to go upstairs.
After he gave them water, the two persons allegedly tried to get inside the room attached to the shop, claiming that they wanted to check something. When Roy protested, they tried to get inside forcefully, resulting in a scrimmage.
In the middle of the fracas, Roy somehow locked the room and tried to get away, but he was caught by the two strangers and was physically assaulted. They left him bleeding from the mouth and with broken teeth.
Soon after that, the police reached the spot and took Roy’s statement. Reportedly, the two persons had also been involved in arguments with other shopkeepers in the same area.
According to Roy, the two miscreants appeared to be aged between 25 years to 30 years, and were Nagas.
At the time of the incident the shop was closed. The miscreants wanted to get inside the room which is also the entry to the shop, it is learnt.
Meanwhile, the Dimapur Bengali Samaj (DBS) has condemned the unprovoked assault on Anil Roy of Chatteshwary Colony on Sunday by two unidentified person who were trying to access his house and shop forcefully for reasons best known to them.

At a time when the state along with the whole country is going through a crisis, such an incident is saddening and every right thinking citizen and organisation should condemn the act, the DBS said in a press release.
The Dimapur Bengali Samaj urged the police to book the miscreants at the earliest and award them appropriate punishment. It also wished Anil Roy a speedy recovery from the injuries he sustained. (Page News Service)