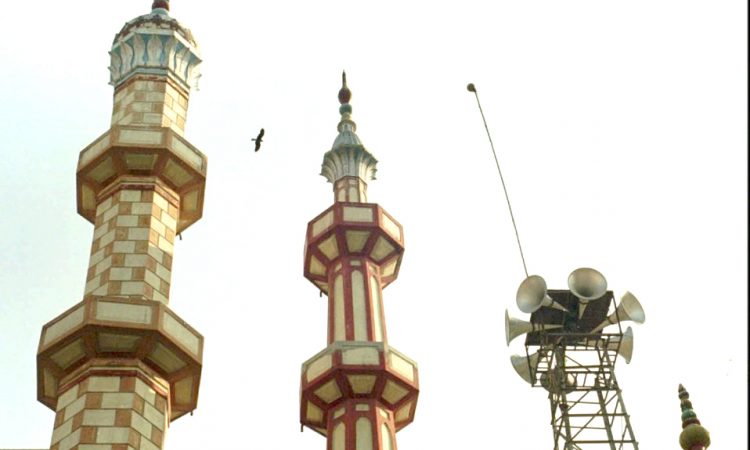 FOR USE WITH FEATURE PACKAGE FOR FRIDAY, APRIL 4--A bunch of screaming loudspeakers join the minarets of a mosque as they reach for the Calcutta skyline, March 17, 1997. The east Indian city of Calcutta, often described as one of the dirtiest cities in Asia, has now been labelled as the most noisiest and the government and courts are trying to clamp down on mosques and temples that use loudspeakers several times a day to broadcast prayer calls. (AP Photo/Saurabh Das)

Mumbai, December 2: The Shiv Sena has asked the Centre to take steps to stop the use of loudspeakers in mosques to curb noise pollution. An editorial in Sena mouthpiece “Saamana” said the issue is of noise pollution and environment protection.
“The Centre should promulgate an ordinance to stop loudspeakers on mosques to prevent noise pollution,” it said.
The comments came amid a row over Shiv Sena’s Mumbai-South vibhag pramukh (division head) Pandurang Sakpal’s suggestion of holding an “Azaan” recital competition for Muslim children.
The editorial said the BJP’s criticism of the Sena leader praising “Azaan” was similar to describing farmers agitating (against new farm laws) on the Delhi borders as “Pakistani terrorists.”
It said most of the agitating farmers are former soldiers or those whose children are defending the country’s borders now.
“What to expect from these people who call the farmers terrorists. Trolls say the Shiv Sena has given up Hindutva, but pictures of them (BJP leaders) eating Eid delicacies are published,” the Marathi publication said.
“We don’t want to politicise this because the country’s 22 crore Muslims are Indian citizens,” it added.
It also said even though a law has been passed against cow slaughter, its sale, purchase and consumption is legal in the BJP-ruled states of Goaand North East.
“If this is not appeasement for votes, then what it is?” the editorial asked.
Defending Sena leader Sakpal, the editorial said he had only suggested to a Muslim foundation to hold an online “Azaan” competition so that people don’t crowd outside, and celebrate rituals and festivals digitally from home. (PTI)