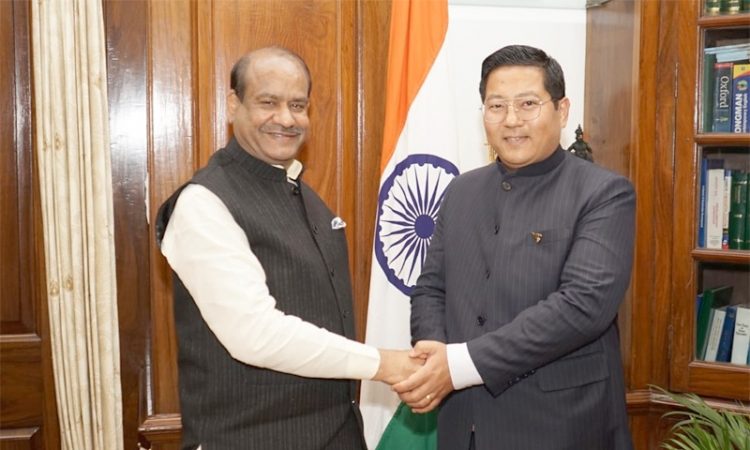 Dimapur, February 27: Nagaland Legislative Assembly Speaker, Sharingain Longkumer, called on the Speaker. Lok Sabha, Om Birla at his Office in the Parliament House on February 26.
During their meeting, they discussed several matters of common interest for the State Assembly and the Parliament.
Sharingain Longkumer took up the issue of organizing Orientation Programme for the Members of the State Assembly in Kohima, through the Lok Sabha Secretariat’s Training and Research Division, PRIDE. He also stressed on the need for creating greater opportunities for the training of the Assembly Secretariat’s Staff both in Delhi and in Kohima with the support of PRIDE.
He also took up the matter of the implementation of the E-Vidhan programme, the paperless Assembly project, an extension of the e-Governance and Digital India initiatives of the Govemment of India for which the Lok Sabha Secretariat is now the nodal institution – for the Nagaland Legislative Assembly.
Speaker, Lok Sabha has promised full support and co-operation in fulfilling all the requests placed before him by Sharingain Longkumer. In some of the areas like organizing the Training and Orientation Programmes, early outcomes are expected.
Speaker, Nagaland Legislative Assembly was accompanied by the Assembly Secretary, Dr. P J Antony and the Assembly’s Legal Consultant, N Benjamin Newmai. (Page News Service)