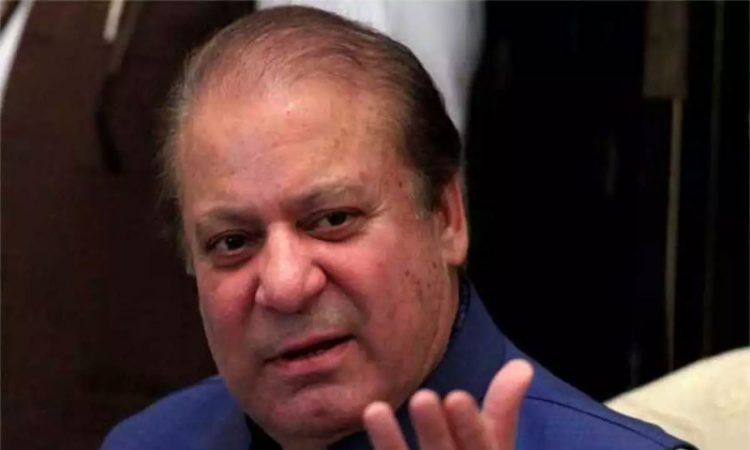 Karachi, October 26: Pakistan’s deposed prime minister Nawaz Sharif has blamed Army chief Gen Qamar Javed Bajwa and ISI chief Lt Gen Faiz Hameed for the current political situation in the country, as the Opposition parties held their third massive joint rally against Prime Minister Imran Khan-led government.
The Pakistan Democratic Movement (PDM), a coalition of 11 Opposition parties, was formed to oust Khan from power on September 20. The alliance held two massive back-to-back gatherings in Gujranwala and Karachi this month. The third rally was held in Quetta, capital of the restive Baluchistan province, on Sunday.
Addressing the gathering via video link from London, the three-time prime minister and chief of the Pakistan Muslim League (PML-N) again blamed Army chief Bajwa and ISI Director General Hameed for Pakistan’s current situation.
“Gen Bajwa, you will have to answer for record rigging in the 2018 elections, for horse-trading in Parliament, for making Imran Niazi prime minister against people’s wishes and [by] tearing apart the Constitution and laws, for pushing people towards poverty and hunger,” 70-year-old Sharif said.
Sharif, who is entangled in a number of corruption cases, has been in London since November last year after the Lahore High Court granted him permission to go abroad for four weeks for treating the heart disease and an immune system disorder.
He also accused the ISI chief of “interfering in politics for several years with impunity” in violation of his oath. Sharif said that he names individuals “because I don’t want my Army to be defamed”.
Pakistan’s powerful Army has denied meddling in politics. Prime Minister Khan also denies that the Army helped him win the election in 2018.
“Looking at this enthusiasm, I am sure that no one will be able to violate the voters’ mandate now. I saw this enthusiasm in Gujranwala and Karachi, and now I’m seeing it in Quetta,” Sharif said, addressing the huge crowd at the stadium.
“I am aware of Baloch people’s problems, Nawaz Sharif knows […] the missing persons issue is still there. I feel pain when I see the victims,” he said, in an apparent reference to the forced disappearance of hundreds of Baloch people.
He said that the PDM has risen against “unconstitutional powers that have made Pakistan hollow from inside and out”.
This is not the first time Sharif has made such allegations against top Army brass; he made similar ones in the Gujranwala rally after which a furious Prime Minister Khan had declared that he would get “tougher” with the Opposition.
Sharif’s daughter and PML-N vice president Maryam Nawaz in her speech said that time has come to change the fate of Pakistan – and Balochistan.
“No longer will husbands and brothers go missing, people of Balochistan,” she said, addressing the attendees.
“The reason you are deprived of food and shelter is that your vote is not respected. Those who rule you are not answerable to you but to someone else, someone else pulls their strings,” she said.
Maryam said that the “sun is about to set” on the current “dictatorial regime” and “the puppet show will soon come to an end”.
Addressing the rally via video link, Pakistan People’s Party chief Bilawal Bhutto Zardari asked, “What sort of a democracy is this where the media isn’t free and neither is the judiciary.”
In his speech, Balochistan National Party President Sardar Akhtar Mengal lashed out at the Khan government and establishment over the missing persons’ issue.
He also alleged that since 1947, governments had never kept their agreements with the Baloch people and they were not treated as equal citizens of the country.
Meanwhile, Mohsin Dawar, a big critic of the government, was taken into custody by security officials at the Quetta airport on Saturday when he arrived for the rally.
Home Minister Ziaullah Langove said that there was a ban on Dawar’s entry in the province. The ban is set to expire on October 29.
Dawar, a lawmaker and leader of Pashtun Tahafuz Movement (PTM), tweeted that he had been told he was not allowed to enter because of security risks and said he refused to be silenced like this. And will not be intimidated.
As the public meeting began at the Ayub Stadium in Quetta on Sunday, the city witnessed a blast that killed three people and injured seven others in Hazarganji area, 35 to 40 minutes away from the rally site.
According to police, an improvised explosive device (IED) was planted in a motorcycle.
Undeterred by the blast, the PDM leaders went ahead with the rally, which was attended by PDM president Maulana Fazlur Rehman and other top leaders of the coalition.
The National Counter Terrorism Authority had earlier issued a security alert saying it received “credible information” that opposition rallies in Quetta and Peshawar could be targeted by militants.
The provincial government had asked the PDM not to hold the rally given the threats. However, PDM leaders rejected the call. (PTI)