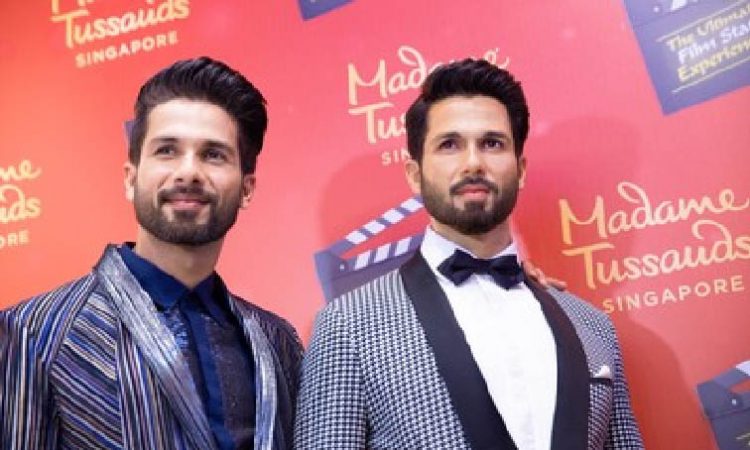 Actor Shahid Kapoor has unveiled his wax figure at the Madame Tussauds Wax Museum in Singapore. He took to Instagram to share first pictures with his statue, which does look like a spitting image of the star.
“#Twinning,” he captioned a picture on Instagram which shows him posing with the wax statue. Both, the real Shahid and the wax one, are wearing stylish suits and the same shoes. More pictures posted on his Instagram stories show him fixing the figure’s hair or clicking selfies with it.
The actor’s fans could not believe how uncanny the figure looked. “Which one is real,” asked a fan in the comments section of Shahid’s pic. “Who’s the real one you should mention Shasha,” suggested another. “Awesome….took me seconds to differentiate,” commented another fan.
Talking about getting a wax statue at Madame Tussaud’s, Shahid earlier told Hindustan Times, “You do feel special, blessed and privileged that you’ll be a part of an elite group of people, who are achievers. Also, I’m curious and excited to see what the statue looks like, and I’m sure that moment will be a bit weird and surreal. When I saw a picture of Mahesh Babu with his statue, I couldn’t figure out the real person (laughs). I am happy that they thought I was deserving of a wax statue. I am thrilled to be there and be a part of that experience. I’m sure it will be nice.
Shahid left for Singapore earlier this week with his wife Mira, daughter Misha and son Zain. However, he said his kids would not be with him for the unveiling. “As for Misha and Zain, we don’t plan to take them for the unveiling of the statue. Otherwise they may think, ‘wow, what just happened?’ as it could be a traumatic experience for them to see two dads (laughs). So, only Mira will join me,” he said.