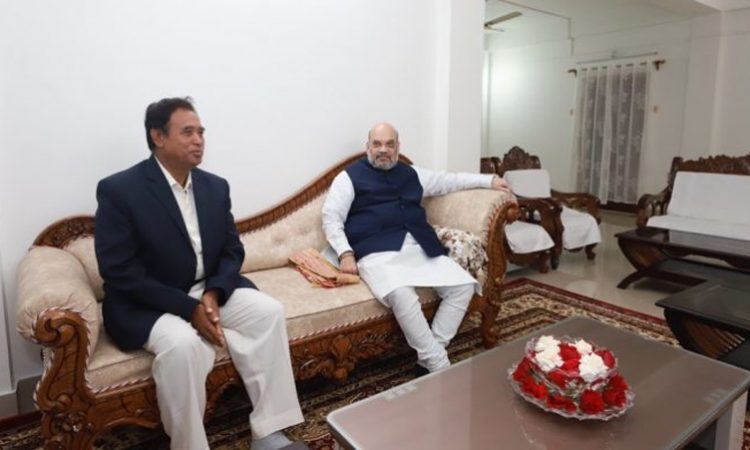 Roy, who calls himself a descendant of the Coochbehar royal family in West Bengal, told mediapersons that the Union home minister held talks with him on the long-pending demands of his community that has a substantial population in lower Assam and the neighbouring state.
He also said that Shah has given assurance that a “package” would be announced for the Koch-Rajbonghshis after state elections.
“All our pending demands were discussed at the meeting, and now I can only say that good days are ahead for the Koch-Rajbongshi community,” Roy said.
Shah, who arrived in Guwahati on Wednesday night, was accompanied by BJP national general secretary Kailash Vijayvargiya, North East Democratic Alliance (NEDA) convenor Himanta Biswa Sarma and Assam BJP president Ranjeet Dass during his visit to Roy’s residence at Chatipur here.
Asked if talks were held on the contentious National Register of Citizens (NRC) exercise and the Citizenship Amendment Act (CAA), Roy said no such matter was discussed as the Union home ministry has already declared the Koch- Rajbongshis as “aboriginals”.
“We belong to this land… so how can we be outsiders? Besides, we have been declared aboriginals by the home ministry,” he said.
The Koch-Rajbongshis along with five other communities in Assam has long been demanding the Scheduled Tribe (ST) status.
To a query if talks progressed on that front, Roy said that a committee is looking into the matter, and refused to give any further detail.
Roy also clarified that “his outfit, which enjoys the support of 18.50 lakh members, is already a part of the NDA”, when enquired if an alliance with the BJP was in the offing, ahead of the assembly polls in Assam and Bengal.
He also said that he heads another group — Narayani Sena – which has over one lakh volunteers.
The GCPA leader further stated that a skill development training centre, named after Koch Commander-in- Chief Bir Chilarai, would be set up in Assam.
He urged the people of his community to be patient as “we have been assured that all our demands will be fulfilled in due course of time. I cannot say anything more than this”.
Roy also hoped that the Bengal government would withdraw various cases filed against him in the neighbouring state, but refused to give more information in the matter.

According to the GCPA chief, Shah was “served a traditional fare, consisting of sweetmeats ‘pithas and tiler laru’, and he enjoyed the meal, and asked for more”.
Roy said that he had invited the Union minister to his residence during one of his trips to Delhi.
Assembly elections in Bengal and Assam are likely to be held in April-May. (PTI)