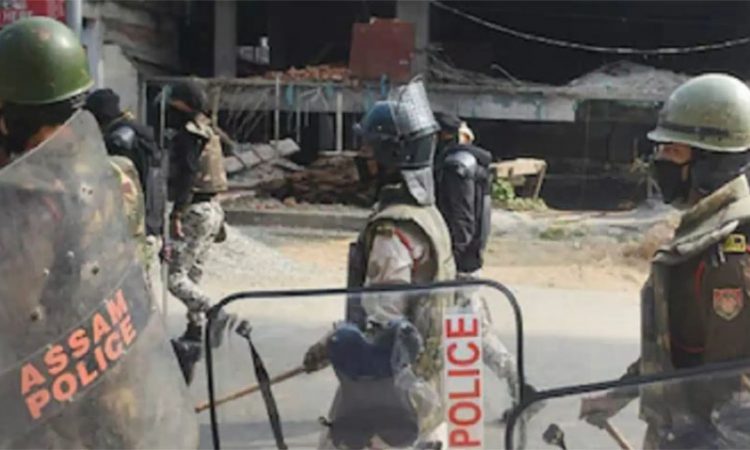 Guwahati, July 24: Several people, including policemen, were injured when security personnel used force to disperse protestors who were allegedly preventing OIL authorities from clearing materials from its Baghjan oil well site, which was the spot of a major fire last year, in Assam’s Tinsukia district on Saturday, a senior police officer said.

The Oil India Limited (OIL) had been trying to move out the materials at its now-closed Baghjan oil well but a section of local people has been reportedly resisting it, maintaining that they will allow the site to be cleared only after their entire compensation amount from the PSU is paid.
About 200-240 people had gathered today and were once again preventing the OIL authorities from taking away their materials. As a law and order situation emerged, we were compelled to use non-lethal force, Tinsukia superintendent of police Debojit Deuri told PTI.
Six protestors and a few police personnel were injured, he said.
Some police vehicles were also damaged.
The protestors started pelting stones at the police team, which prompted the police to use force to control the situation, the SP said.
Deuri further said the local administration had been urging the people to allow OIL to clear their site when similar resistance was offered on earlier occasions also.
If there is any discontent with the amount of compensation or if someone feels that it is not being paid as specified, he can approach the appropriate authorities or courts. But preventing the OIL from clearing the site cannot be a solution, he said.
The SP added that OIL has started the process of moving out its stuff from the site.
A blowout had occurred at Well No 5 in the Baghjan oil field in May last year, resulting in a leak of natural gas. The leaking well subsequently caught fire on June 9, 2020, and resulted in three deaths.

An estimated loss of Rs 25,000 crore and a biodiversity loss of 55% have been caused b the blowout, according to an inquiry report prepared by an official of the state Forest Department.
Regarding compensation to the people near the Baghjan well, OIL earlier said it had deposited the money estimated by the Tinsukia district administration and the National Green Tribunal after surveying 2,756 families. (PTI)