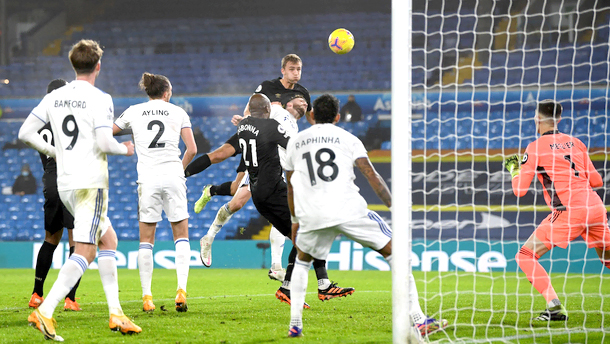 LEEDS, December 12: Two headed goals from set pieces by midfielder Tomas Soucek and defender Angelo Ogbonna helped West Ham United fight back from a goal down to beat Leeds United 2-1 in their Premier League clash at Elland Road on Friday.
West Ham goalkeeper Lukasz Fabianski conceded a penalty in the second minute when he brought down Patrick Bamford and seemed to have redeemed himself by saving Mateusz Klich’s spot kick.
However, after a review by the video assistant referee (VAR) a retake was ordered due to Fabianski leaving his line, and Klich scored at the second attempt.
West Ham’s French striker Sebastien Haller had two early chances blocked before Soucek put West Ham level in the 25th minute, out-muscling defender Stuart Dallas to head the ball into the net.
Two substitutions at the break briefly gave Leeds a new lease of life but the visitors soon took over again, and they eventually went ahead thanks to Ogbonna’s far-post header from an Aaron Cresswell free kick ten minutes from time.
Ogbonna almost turned provider late on, crossing for centre-back partner Fabian Balbuena to head against the far post, and Leeds midfielder Rodrigo almost made them pay with a late header of his own, but he couldn’t steer the ball past Fabianski.
“You look at our set pieces and it’s a massive part of our game, it’s worked again tonight,” West Ham left back Cresswell told Sky Sports after his side joined Chelsea as the league’s most potent team from dead balls with eight goals each.
“We didn’t lose our heads and Angelo Ogbonna stepped up. We have got to keep looking forward but not get too far ahead of ourselves,” he added.
The win lifts the Hammers to fifth spot in the standings with 20 points after 12 games. Leeds remain in 14th place on 14 points.
Pandemic sees Everton report record losses of $185 million
English Premier League club Everton announced record losses of 140 million pounds ( 185 million) after feeling a heavy financial impact from the pandemic.
The club’s deficit is considerably worse than a year ago when it posted a then-record loss of 111.8 million pounds, albeit over a 13-month accounting period.
Everton said the cost of the disruption by the pandemic amounted to 67.3 million pounds, with last season suspended for three months until June and then resuming in empty stadiums.
To help offset the losses, majority shareholder Farhad Moshiri injected another 50 million pounds of his own funds during the financial year up to June 30 and has put in a further 50 million pounds since then.
That took Moshiri’s investment in the northwest English club since assuming control in February 2016 to 400 million pounds, with plans for a further 100 million pounds to be injected.
The club is creating proposing a new share issue to Moshiri’s Blue Heaven Holdings up to a value of 250 million pounds, with the conversion of previous shareholder loans into equity equating to 150 million pounds of that total. That would potentially take his share in the club from 77.2% to 93.3%.
Clearly this has been a very challenging year, not least from a financial perspective with the impact of COVID-19 having a profound, wide-reaching and material impact on our figures,” Everton chief executive Denise Barrett-Baxendale said on Friday.
Prior to the pandemic, we were forecasting record revenues in excess of 200 million pounds. Our final accounts show that a significant proportion of our losses have been directly attributable to the pandemic.
However, in this period, it is encouraging that our commercial performance has improved markedly, and this will continue to be a priority moving forward.”
Due to Moshiri’s continued investment, net debt was reduced to 2.3 million pounds from 9.2 million pounds in 2018-19, while the club’s sponsorship, advertising and merchandising revenue of 64 million pounds was more than double the previous year’s total of 29 million pounds.
There was a 113 million pounds investment in the squad during the 2019-20 financial year, with a further 70 million pounds since then. The payoff to former manager Marco Silva and his backroom team last December amounted to 6.6 million pounds. (Reuters/AP)