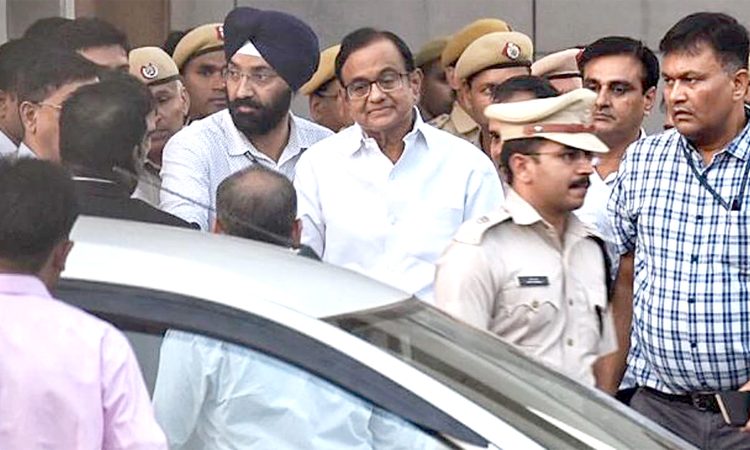 NEW DELHI, August 22: Congress leader P Chidambaram was on Thursday sent to CBI custody till August 26 by a Delhi court which said his custodial interrogation was justified in the INX Media corruption case.
“Allegations against Chidambaram are serious in nature and in-depth investigation is required,” the court said as it rejected the arguments of the Congress leader’s lawyers.
“Considering the facts and circumstances, I am of the view that police custody is justified,” special judge Ajay Kumar Kuhar said after listening to the arguments of both sides.
“Trail of money, if so paid, is to be ascertained. It is a case based on documentary evidence and those documents need to be traced,” the court said.
The court observed that allegations of payment to Chidambaram in 2007-08 and 2008-09 are specific and categorical.
“Investigation needs to be brought to a logical end for which custodial interrogation is sometimes found useful and fruitful,” it said.
Ruling in favour of CBI, the court ordered that during Chidambaram’s custody the agency will get him medically examined regularly as per the rules, and allowed his family members and lawyers to meet him for half an hour every day.
Chidambaram was produced in the court amidst tight security and senior advocate Kapil Sibal, appearing for him, argued that the first arrest in the case was of Bhaskar Raman, chartered accountant of Karti, who is presently out on bail.
The court heard the arguments of the CBI and Chidambaram’s counsel for over one-and-half hours during which the agency said there was a need to unearth a larger conspiracy and to go to the root of the case.
Chidamabaram’s counsel opposed the CBI plea saying that all the other accused, including his son Karti, have already been granted bail in the case.
Besides that, Peter and Indrani Mukherjea, also accused in the case, are out on default bail as they are in jail in connection with another matter, Sibal said.
He said the FIPB approval was given by senior officials, who were not arrested.
He also contended that grant of bail was a rule and the issue before the court was of personal liberty.
However, solicitor general Tushar Mehta said CBI has to interrogate Chidambaram in custody as he was non-cooperative and evasive in replies.
The solicitor general told the court that the agency was not extorting confession from Chidambaram but it had the right to reach the root of the case.
“It is a serious case involving intelligent people and we will fail in our duty if we don’t get to the root of the case,” the solicitor general said, adding that even Karti underwent custodial interrogation in the case.
Mehta said Chidambaram has tremendous potential of not cooperating in probe since he is highly intelligent and certain facts about the case cannot be narrated in the open court.
Besides Sibal, senior advocate Abhishek M Singhvi also appeared for Chidambaram, and opposed CBI’s plea saying that the former Union minister was not a flight risk.
Singhvi said the entire CBI case was based on the statement of Indrani Mukherjea, who has turned approver in the case.
He said Chidambaram cannot answer what CBI wants to hear and added that the agency cannot seek remand on the ground of evasive replies.
He also argued that there was no allegation of tampering of evidence by CBI.
Singhvi further contended that police remand can only be granted in special circumstances and this was a case where there was no new development.
He said the agency was asking Chidambaram only old questions since his arrest on Wednesday night.
Mehta countered the arguments advanced on behalf of Chidambaram, saying that everybody was equal before the court.
He also opposed the plea that Chidambaram be allowed to argue for himself, saying he has able lawyers representing him.
Mehta said during his initial arguments that Chidambaram entered into a criminal conspiracy with others in the scam.
Chidambaram was arrested after issuance of non-bailable warrant against him, he said, adding that it is a serious and monumental case of money laundering.
“He is not cooperating in the investigation,” Mehta said, adding that he has been evasive in replies and grave offence was committed.
He also said Chidambaram’s custodial interrogation was necessary to unearth the “quid pro quo and larger conspiracy” and he is required to be confronted with documents.
Mehta contended that serious, active and informed role of the accused is made out and money trail is made out and has to be probed.
Opposing CBI’s arguments, Sibal contended that what the agency said be not taken as “gospel truth”.
He said that Chidambaram was asked 12 questions and he had already answered six of them previously.
Sibal said Chidambaram had requested the agency sleuths to take him in custody on Thursday morning as he had not slept for last 24 hours.
But they did not listen to him and took him last night itself, he said.
Sibal further argued that CBI could have written a letter to Chidambaram for producing the documents alleged to be in his possession and the agency cannot say he was evasive during the investigation.
After the pronouncement of the order, 73-year-old Chidambaram was immediately taken out of the court room by the CBI team.
Chidambaram, who was Union home minister and also finance minister during the UPA rule from 2004 to 2014, was arrested Wednesday night after he failed to get protection from the Supreme Court, which did not list for an urgent hearing his appeal against the Delhi high court verdict dismissing his anticipatory bail plea on Tuesday.
The CBI had registered an FIR on May 15, 2017, alleging irregularities in the Foreign Investment Promotion Board (FIPB) clearance granted to the INX Media group for receiving overseas funds of Rs 305 crore in 2007 during Chidambaram’s tenure as the finance minister.
Thereafter, the ED lodged a money laundering case in this regard in 2018. (PTI)