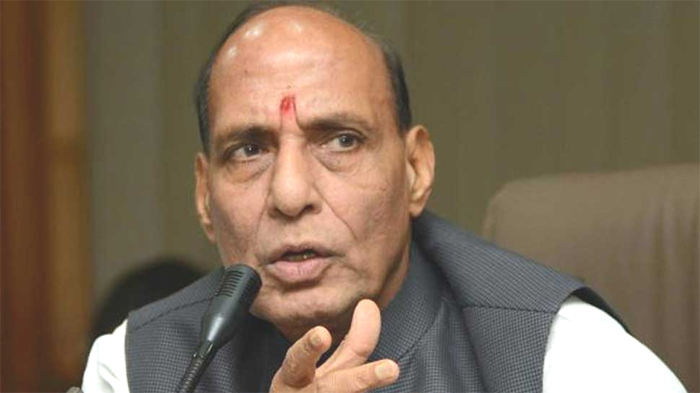 New Delhi, January 4: Home Minister Rajnath Singh Friday said sensationalism in journalism should be avoided as it is an insult to the profession and asked journalists not to mix ideology with news.
Delivering his keynote address after presenting the Ramnath Goenka Excellence in Journalism Awards to 29 journalists, Singh said he did not believe that “friendship” between government and media was not possible.
‘Dosti na ho par bair bhee na ho’ (It is okay if there is no friendship between media and government. But there should be no enmity between the two), he said.
The home minister said honest journalism gives strength to the country and strengthens democracy.
“If any news is made sensational, then it is an insult to journalism. If we are in the race for sensationalism there will be no objectivity. It should be avoided,” he said.
Singh said media’s role is to act as a guardian of democracy and impartial journalism brings shine to the profession.
“Media should show mirror to power but it should have no colours…Don’t mix news with ideology. It can pose a question mark on its credibility.
“There is separate space for views in a newspaper,” the minister said.
To accept one’s own mistake, he said, is a very courageous thing to do.
“One does not become small by seeking forgiveness but this enhances your stature,” he said.
Any journalistic act, Singh said, if becomes a cover for anti-national acts, we should be away from such attempts.
“There should be no agenda,” he said.
He said journalism is a relation of trust and journalists and its practitioners should be vigilant that people’s trust does not break, he said.
“It was due to Ramnath Goenka’s (founder of The Indian Express) dedication that the standard of journalism has gone up. Ramnath Goenka had to pay a lot of price for opposing emergency but he had vowed not to compromise with integrity,” Singh said.
Talking about the role of social media, he said it has become a big challenge as there have been trends of fake news, coloured news.
He, however, added that the role and importance of “conventional media” in the society “cannot go out.”
Referring to the critical news, the home minister said everyone should take criticism with a sporting spirit.
He also questioned those who had said “Naxals are Gandhians with guns”.
“I cannot fathom how Gandhi can have gun? Those people who secure the country…Is there no human rights for security forces personnel?”, he said.
He said ‘loktantra loklaaj se chalta hai’ (democracy runs on public sentiments).
The minister praised Ramnath Goenka saying: I don’t agree quickly to attend public programmes but I have a special respect for Ramnath Goenka since the age of 24.
“He (Goenka) was known for his excellence in journalism. An institute is known how it deals with extra-ordinary situations. The country is indebted to him,” he said.
I firmly believe that the Indian Express will continue to pursue credible journalism with courage,he said. (PTI)