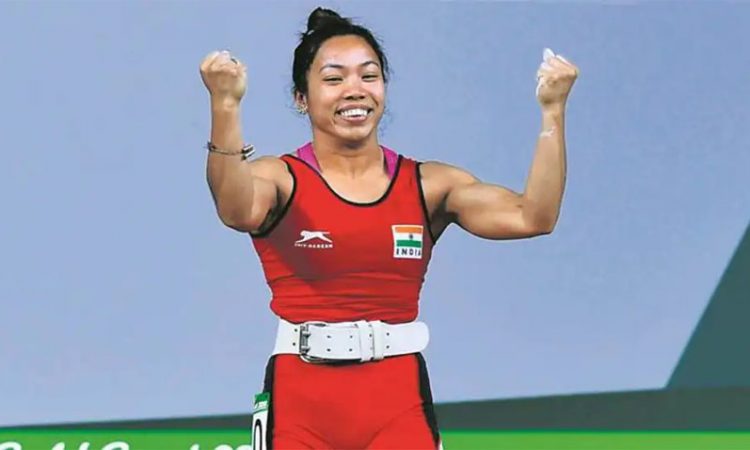 Tokyo, July 24: A confident smile never leaving her face, Mirabai Chanu ended India’s over two-decade long wait for a weightlifting medal at the Olympics, clinching the 49kg category silver medal five years after leaving the same platform in tears following a disastrous debut.
With her historic triumph, she ensured that India was second on the medals tally for now, a feat that has never been achieved before by the country.

The diminutive iron lady from Manipur lifted a total of 202kg (87kg+115kg) to better Karnam Malleswari’s bronze in the 2000 Sydney Olympics. With this, she exorcised the ghosts of the 2016 Games where she had failed to log a single legitimate lift, leaving her shattered.
Her smile shone the brightest during the entire performance on Saturday but also hard to miss were the Olympic rings’ shaped earrings that she was sporting, which were a gift from her mother.
The gold went to China’s Hou Zhihui with an effort of 210kg (94kg+116kg), who created Olympic records in all three categories (snatch, clean and jerk and Total).
Aisah Windy Cantika of Indonesia took home the bronze with an effort of 194kg (84kg+110kg).
Considered her weakness in the run up to the marquee event, Chanu attempted 84kg in her first snatch attempt. The Manipuri took her time and cleanly heaved the barbell.
She lifted 87kg in her next attempt and raised the weight to 89kg, which was 1kg more than her personal best of 88kg that she had lifted at the national championship last year.
However, she was unable to better her personal best and settled for 87kg in the snatch event only behind leader Zhihui, who created a new Olympic record with an effort of 94kg.
The Chinese lifter also holds the world mark (96kg) in the category.
In the clean and jerk, world record holder Chanu lifted 110kg and 115kg in the first two attempts.
However, she was unable to raise 117kg in her final attempt, which would have been an Olympic record but it was enough to fetch her a medal and open India’s account.
The diminutive Mannipuri broke down after realising that she has secured a medal and hugged head coach Vijay Sharma in jubiliation.

She later broke into a punjabi bhangra too to celebrate the historic podium finish.
Delighted by her achievement, not even a face mask could hide Chanu’s smile that spread ear to ear at the medal ceremony, where there was a bit of confusion among the winners.
As per COVID-19 protocols laid out for the Games, the winners were supposed to be social distanced and not pose for a group photograph as per the Games protocols.
But the three medallist congratulated each other and came together to get pictures clicked before being asked to distance by an official.
An Olympic medal was long overdue for the Indian, who has proved her mettle as a fighter in the international arena time and again.
Her cabinet includes a coveted world championship gold medal, two Commonwealth Games medals — silver in 2014 and gold in 2018 — and an Asian Championship bronze. (PTI)

Chanu became the first Indian weightlifter to win silver medal in Olympics.
“Could not have asked for a happier start to Tokyo2020! India is elated by Mirabai Chanu’s stupendous performance. Congratulations to her for winning the Silver medal in weightlifting. Her success motivates every Indian,” Modi tweeted with the hashtag ‘Cheer4India’. (PTI)