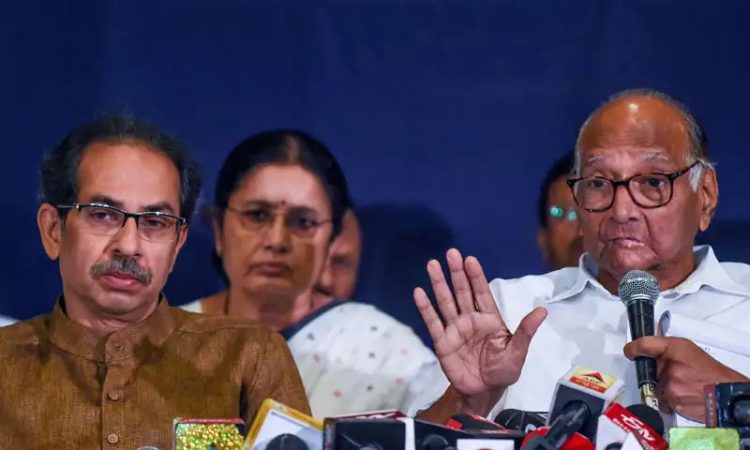 New Delhi, November 23: The Shiv Sena, Nationalist Congress Party and the Congress moved the Supreme Court after the BJP sprung a huge Saturday morning surprise and had Devendra Fadnavis sworn-in as Maharashtra chief minister for the second term with help from NCP’s Ajit Pawar. The apex court will hear the petition at 11.30 am on Sunday.
The Shiv Sena and the Congress formally filed a petition in the Supreme Court at 8.25 pm on Saturday evening seeking the top court’s help in quashing Governor Koshyari’s decision to invite Devendra Fadnavis to form the government in Maharashtra. The composition of the bench, however, is not yet known.
The political parties also want the court to further direct the governor to invite them since they have the “majority” to form a coalition government in the state.
“Facing the prospect of a non-BJP government staking claim to power, the BJP in the intervening night of 22.11.2019 and 23.11.2019 has resorted to political machinations in an attempt to install a completely unconstitutional BJP government in the state… There is nothing in the public domain as to how and in what manner Devendra Fadnavis and/or the BJP had staked claim to power between the intervening night of 22.11.2019 and 23.11.2019,” the three parties submitted in their petition before the top court.
Just last night, the three parties, which are ideologically divergent, had worked out a common minimum programme and NCP chief Sharad Pawar had declared that Sena’s Uddhav Thackeray would be the new chief minister of Maharashtra.
However, the parties were stumped this morning when the channels flashed that Devendra Fadnavis was taking oath as Maharashtra CM and joining him as his deputy was NCP’s Ajit Pawar.
The petitioners questioned the “hot haste” behind the move and also wanted to know as to how the governor arrived at the decision to invite the BJP leader when the parties had already formalized their alliance last evening.
“It is not understood as to what was the hurry and/or the hot haste to revoke President’s Rule at 5:47 am and administer oath at around 8:00 am barely two and a half hours later. The Hon’ble Governor was duty bound to study the claim if any made by Shri Devendra Fadnavis, more so when admittedly the previous night all the three political parties commanding a strength of 154 MLAs had categorically stated that they would be staking claim to form the government,” said the petitioners.
The petitioners claimed that all the MLAs of the Shiv Sena, NCP and Congress are completely and solidly with their Maha Vikas Aghadhi alliance except for Ajit Pawar.
The petitioners accused the Governor of acting in a “partisan manner” making a “mockery of the high office”. They further alleged that the Governor was “acting at the behest of a political party in power at the Centre”. (Courtesy: HT)