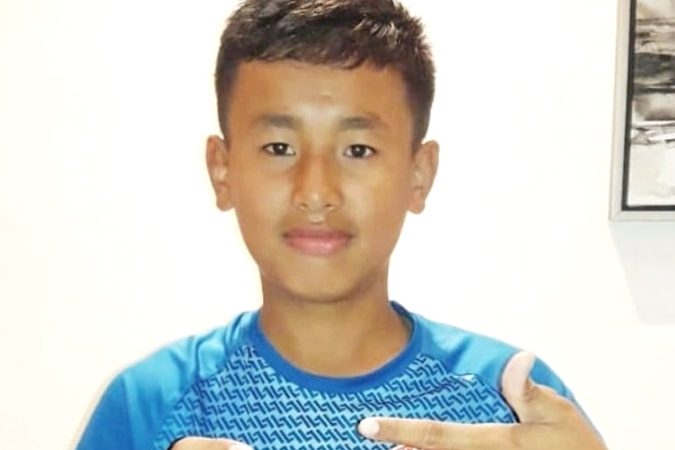 KOLKATA, February 15: Watching highlights of Shane Warne’s magical spells was all that 16-year-old Nagaland leg-spinner Khrievitso Kense got in terms of formative coaching and the “carefree” teenager is now gearing up to make the big league and also earn some big bucks at the IPL players’ auction on February 18.

Fifth among seven siblings, the carpenter’s son from Sovima village near Dimapur, Kense says he became a cricketer all by himself and honed his skills by watching Warne on TV.
He has a base price of Rs 20 lakh and the buzz is that both the Mumbai Indians and the Rajasthan Royals are eyeing the youngest player in an auction pool of 292. He turns 17 on March 6.
“I was initially bowling off-spin. But my fingers started paining. Then I tried leg-spin. I didn’t have anyone to coach me. So I followed Shane Warne on TV and phone,” he told PTI from Chennai, where he is currently in quarantine ahead of the Vijay Hazare trophy starting February 18.
“I really liked the way he turned the ball. I never had a leg-spin coach, I learnt all by myself. There was a sir who would just guide me as I played U-16 cricket,” he said.
With the help of a local coach, Kense got to play at the U-16 level and made everyone sit up and notice his skills with a five-wicket haul on debut against Uttar Pradesh in a Vijay Merchant Trophy’s 2018-19 pre-quarterfinal.
Nagaland senior team captain Rongsen Jonathan and his deputy Hokaito Zhimomi then called him for senior camp last year where he grabbed the attention of state coach Kanwaljit Singh, a former Hyderabad off-spinner who’s with the team for more than three years.
“He really impressed me with his trajectory which is ideally suited for any format of the game,” the Nagaland coach said recollecting the first time when he saw Kense in the trials.
The only thing that bothered the coach was Kense’s difficult to pronounce first name.
“I had difficulty in getting hold of his name so I started addressing him ‘Kriv’. Actually I call him by any name,” Singh said in a lighter vein, underlining the bond they have developed.
Kense was handed a state debut in Nagaland’s Syed Mushtaq Ali T20 opener against Arunachal Pradesh and was pressed into action inside the Powerplay.
“I was never nervous but that was the only time I felt some pressure. But after I got the first wicket everything became normal,” Kense, who returned with a miserly 1/19 on his debut, told PTI.
In four matches, he snared seven wickets giving away less than six runs an over and had best figures of 3/16 against Mizoram.
“For a kid of his age, he also showed very good control and hardly bowled any loose deliveries. It was exceptional,” Singh said, adding that he also has the height advantage of being nearly six feet at this young age.
He was called by Mumbai Indians and Rajasthan Royals for trials last month before being included in the 292-strong IPL 2021 auction list.
“TA Sekhar (Mumbai Indians scout) saw him and immediately asked us to send him there. Since then he’s been spoken about by people,” Singh said.
For someone who could not realise his dream of playing for India, Singh now hopes the boy will make it big and make him proud.
“IPL would be just the perfect beginning for him to make a mark. It would be a big moment for the state and personally give me a lot of satisfaction for I could not make it but at least I helped someone else,” Singh, who picked up 369 wickets in 111 first-class matches without getting an India call-up, said.
In a state where football comes naturally to young kids, Kense got attracted to cricket from a young age, thanks to his house which is bang opposite the state’s Sovima Cricket Stadium.
“I was always attracted to cricket and never liked football. Sometimes I play table tennis though,” Kense, who idolises Afghanistan swashbuckler Rashid Khan and is a big fan of Sunrisers Hyderabad, said.
“I really loved the way he bowls googlies. Since 2015, I’m a big fan of Sunrisers Hyderabad and watch the IPL with my friends every year,” he added.
It was at the Sovima Cricket Stadium where Nagaland captain Rongsen Jonathan, who also lives in the same village, spotted him bowling at the nets.
“He was quick through the air leaving the batsmen little time to pick his deliveries, and because of the bounce he would extract good bounce. Then he went on to take five wickets in U-16 cricket.
“I called (vice-captain) Hokaito Zhimomi and decided to take him to our coach,” Jonathan said.
Hokaito, the first from the Northeast to be in the IPL as part of the Kolkata Knight Riders reserves for the first three seasons without getting picked, is also trying to live his dream through Kense.
“Now we all are excited for him. He is doing well and fingers crossed, if he makes it then he will start a revolution here and many more will follow. We have many talented cricketers and it will create a good and healthy competition. I hope he achieves what I could not,” Hokaito said.
Kense, however, is unmindful of all the buzz surrounding him.
“I am ‘bindaas’ (carefree) and not thinking much about the auction (on Thursday). The team supports me well and yes we will watch it (the auction) together,” the Nagaland boy concluded. (PTI)