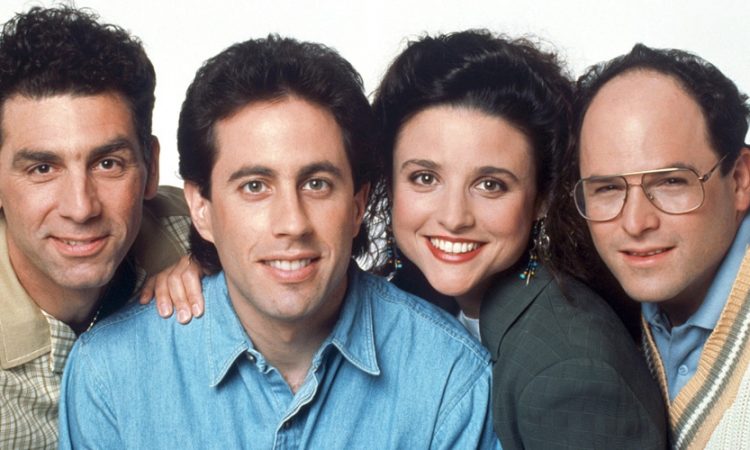 It may be losing Friends and The Office – but Netflix is set to pal up with Seinfeld.
All 180 episodes of the hugely popular sitcom are coming to Netflix in 2021, the streaming service announced Monday.
Netflix acquired global streaming rights from Sony Pictures Television as it fights to reinforce its catalog amid escalating streaming wars between platforms and legacy media companies vying for the rights to popular shows and the millions of viewers they bring in.
Terms of the deal were not disclosed, but a source familiar with the negotiations told CNBC that the price far exceeds the $425million that WarnerMedia paid for Friends and the $500million NBCUniversal paid for The Office – shows that have long been among the most-watched on Netflix.
Netflix will hold the coveted rights to Seinfeld for five years starting in June of 2021, when Sony’s contract with Hulu expires.
Hulu paid $130million for six years of US-only rights to Seinfeld in 2015, according to CNBC.
The Emmy-winning NBC sitcom dominated the airwaves from 1989 to 1998, ending its run while still the number one show in prime time.
It stars comedian Jerry Seinfeld as a version of himself going through single life in Manhattan with his pals, Jason Alexander as George, Julia Louis-Dreyfus as Elaine and Michael Richards as Kramer.
‘Seinfeld is the television comedy that all television comedy is measured against,’ Ted Sarandos, Netflix’s chief content officer, said in a statement about the acquisition. ‘It is as fresh and funny as ever.’
Sony Pictures Television Chairman Mike Hopkins told the Los Angeles Times: ‘Seinfeld is a one-of-a-kind, iconic, culture-defining show.
‘Now, 30 years after its premiere, Seinfeld remains center stage. We’re thrilled to be partnering with Netflix to bring this beloved series to current fans and new audiences around the globe.’
Netflix topped bids from Hulu, Amazon, WarnerMedia, NBCUniversal and Viacom, which controls the CBS All Access streaming service since its merger with CBS Corp, according to people familiar with the deal.
Netflix is widely credited with inventing the streaming industry in 2010 when it began offering a life of syndicated reruns for network shows after their original broadcast run ended.
Since then, the site has amassed nearly 160 million subscribers and now poses a direct threat to the TV industry’s traditional power players.
The Los Gatos, California-based firm took a huge hit earlier this year when it lost the rights to Friends and The Office, whose streaming numbers far outpaced all of the platform’s 140 original programs in 2018, per Nielsen tracking data.
The Office is headed to a streaming service from Comcast Corp’s NBCUniversal in 2021 under a $500million five-year US-only deal.
Friends will move to AT&T Inc’s HBO Max in 2020 under a US-only deal that will run Warner Media $425million over five years.
HBO Max is also reportedly in talks to acquire the rights to ‘The Big Bang Theory’ and ‘Two and a Half Men’ for a mammoth $1.5billion.
Dated classics like Seinfeld and the other sitcoms mentioned above have tremendous streaming value because they can bring in audiences that span generations, from fans who watched the shows when they original aired to viewers seeing them for the first time.
Last week Apple Inc and Walt Disney Co announced that they would be introducing their own streaming services in November, fueling the already highly-competition war for viewers.