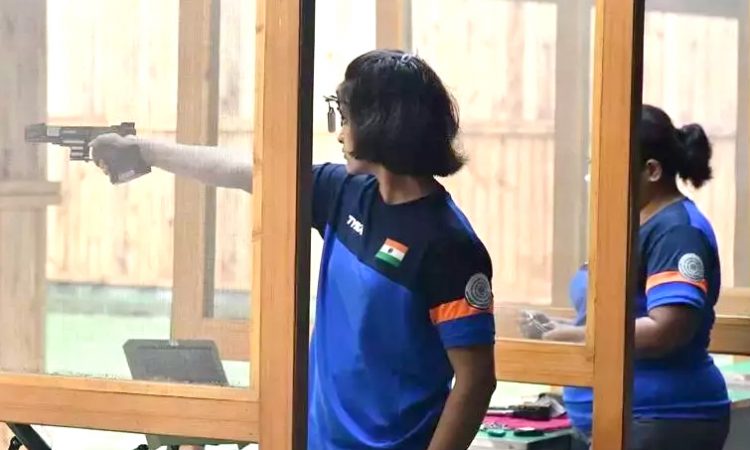 NEW DELHI, November 24: After multiple stop-starts amid the Covid-19 pandemic, India’s national shooting camp successfully completed its first half before Diwali; and the players are now set to welcome their foreign coaches when the remainder of the camp resumes from Wednesday, November 25.
Pistol coach Pavel Smirnov and rifle coach Oleg Mikhailov will join the Indian coaching staff for the national camp of the Olympic core probables at the Dr Karni Singh Shooting Range here.
While the players will be returning from the Diwali break, Smirnov and Oleg arrived earlier this month. The players and coaches will enter the camp biobubble after mandatory quarantine and testing.
Shotgun coach Ennio Falco has reportedly quit but the National Rifle Association of India (NRAI) said they “have not received any official communication” from the Italian skeet shooting coach.
“Oleg and Pavel have arrived and will join the camp,” said the NRAI secretary Rajiv Bhatia. “Pavel arrived a little later and will enter the camp a few days after Oleg does.”
Oleg will be at the camp from Nov 25 and Pavel is expected to join him from the 28th.
After getting approval from the Sports Authority of India, the national camp had begun on October 15 and will conclude on December 14.
“I was missing the guidance of foreign coaches, so any technical things we might have overlooked will get rectified in the remainder of the camp,” veteran rifleman Sanjeev Rajput told TimesofIndia.com.
“Talking about the present stage of my career, I need help from foreign coaches. Without taking anything away from the expertise of our national coaches, most of whom used to shoot with me (as players) earlier, I tend to benefit a little more with the inputs of foreign coaches,” he explained.
Rajput, who bagged a 50m 3 Position Tokyo Olympics quota for India, said his body took time to get used to the rigours of a national camp after an eight-month break.
“Practised for 0.22 (50m 3P) at a stretch after a long gap, so my body was tiring quickly. When I got back in shape, I started feeling fatigued. We were not in a practice routine and now (sudden) over-practice led to fatigue. So this Diwali break was very important. That’s my personal feeling.”
“But I must admit that it overall felt normal after a long time,” he further told TimesofIndia.com.
The younger lot of the core group welcomed the camp environment, something they yearned for.
Manu Bhaker, the current women’s world No. 2 in 10m air Pistol, agreed.
“I had been waiting for this camp. After a long time, I got to train with my India team-mates.” Manu told TimesofIndia.com.
“The main thing was the environment. Everybody was looking forward to that, to train together as a team in the camp with a competitor feeling,” said Bhaker, who also shoots in the 25m Pistol event and bagged a 10m air pistol Olympic quota.
“We are given programmes but playing matches (between ourselves) is completely upon us, if we want to play or not,” she added.
On the arrival of foreign coaches at the camp, Bhaker said she isn’t aware about the development.
“I am training under (Junior India pistol coach) Jaspal Rana sir,” she said.
Both Rajput and Bhaker underwent home quarantine before rejoining the camp.
As of now, the ISSF competitions are scheduled to resume with the shotgun Grand Prix in Morocco from January 28, 2021. India is rostered to host the first World Cup of 2021 (rifle/pistol/shotgun) from March 18 to 29 in Delhi. (TNN)