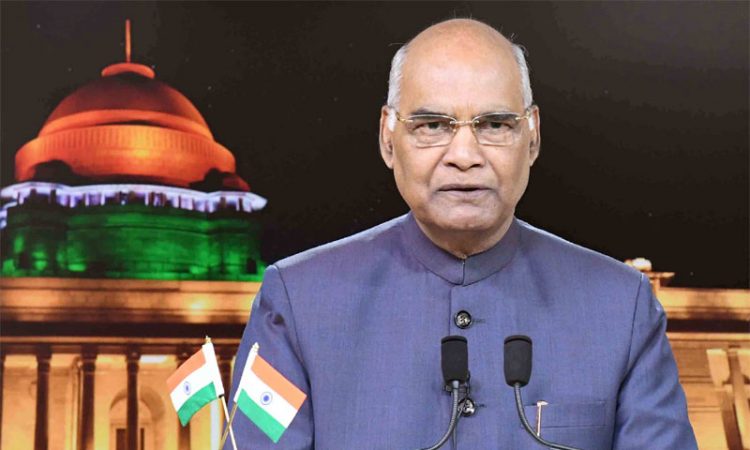 New Delhi, August 14: President Ram Nath Kovind on Wednesday expressed confidence that the people of Jammu and Kashmir will immensely benefit from the revocation of provisions of Article 370 that gave special status to the state and its bifurcation into two Union Territories.
Delivering his Independence Day address to the nation, Kovind also said the changes made in Jammu and Kashmir and Ladakh recently will enable the people to access and enjoy the same rights, same privileges and same facilities as their fellow citizens in the rest of the country.
“…I am confident that the recent changes made in Jammu-Kashmir and Ladakh would be of immense benefit to those regions. They will enable the people to access and enjoy the same rights, same privileges and same facilities as their fellow citizens in the rest of the country,” Kovind said in the address on the eve of the 73rd Independence Day.
The Modi government announced on August 5 the removal of some provisions of Article 370 to take away Jammu and Kashmir’s special status and proposed bifurcation of the state into two Union territories–Jammu and Kashmir and Ladakh–a far-reaching decision that seeks to redraw the map and future of a region at the centre of protracted militancy.
The measures later secured Parliament’s approval. The two UTs will come into existence on October 31.
Kovind made a reference to the changes in Jammu and Kashmir while recalling that the illustrious generation that led us to freedom did not perceive Independence only in terms of transfer of political power.
“They considered it a stepping stone in a longer and larger process of nation building and national welding. Their objective was to improve the life of each individual, each family and society as a whole.”
The President said the recent enactment of new laws and amendments to existing ones will also be beneficial to people of Jammu and Kashmir, adding the law making instant triple talaq a criminal offence will deliver justice for “our daughters”.
“These include progressive, egalitarian laws and provisions related to the Right to Education; accessing public information through the Right to Information; reservations in education and employment and other facilities for traditionally deprived communities; and justice for our daughters by abolishing unequal practices such as instant triple talaq,” he said.
The President observed that India has rarely been a judgemental society and rather it has had an “easy-going, live-and-let-live organising principle.”
“India’s history and destiny, India’s legacy and future, are a function of coexistence and conciliation, of reform and reconciliation–of expanding our hearts and embracing the idea of others.”
Kovind said he was confident India will never lose its capacity to listen to the “feeblest voice” and it will never lose sight of its ancient ideals and will forget neither its sense of fairness nor its sense of adventure.
Complimenting people for taking part in the 17th general elections in April-May, Kovind said every election marks a new beginning and every election is the renewal of India’s collective hope and optimism.
Referring to the recently concluded session of Parliament which recorded lengthy and productive sittings, the President said many important Bills were passed, in a spirit of cross-party cooperation and constructive debate.
“I am confident this is only an indicator of what the coming five years have in store. I also urge that this culture percolates to all our legislative assemblies,” he said.
The President also spoke about how state and society, government and citizen, must see and cooperate with each other.
Kovind said the baton building is about creating that optimal partnership between voters and their representatives, between citizens and their government, and between civil society and state.
“The state and the government have an important role, as a facilitator and an enabler. As such, it is critical for our key institutions and the policy makers to study and appreciate the message being sent by citizens and to be responsive to the thoughts and wishes of our people,” he said.
Kovind said people should use and nurture for their benefit financial and physical infrastructure built by the government like the transparent, inclusive banking system, online friendly tax system, easier access to capital for legitimate entrepreneurs and housing for the poorest of the poor.
Kovind said as the President, he travelled all over the country, to diverse states and regions, and meet citizens from all walks of life.
“Indians can be very different in their tastes and habits, but Indians share the same dreams. Before 1947, the dreams were for a free India. Today, the dreams are for accelerated development; for effective and transparent governance; and yet for a smaller footprint of government in our everyday lives,” he said.
The President said fulfilling these dreams is essential and any reading of the mandate of the people would make their aspirations clear. “And while the government inevitably has its part to play, I would argue that the greater opportunity and ability lies in the skill, talent, innovation, creativity and entrepreneurship of 1.3 billion Indians.”
Kovind said contemporary India is very different from the India in which Mahatma Gandhi lived and worked.
“Even so, Gandhiji remains extremely relevant. In his advocacy of sustainability, ecological sensitivity and living in harmony with nature, he anticipated pressing challenges of our times.
“When we design and deliver welfare programmes for our disadvantaged fellow citizens and families, when we seek to harness the power of the sun as renewable energy, we put Gandhian philosophy into action,” he said. (PTI)