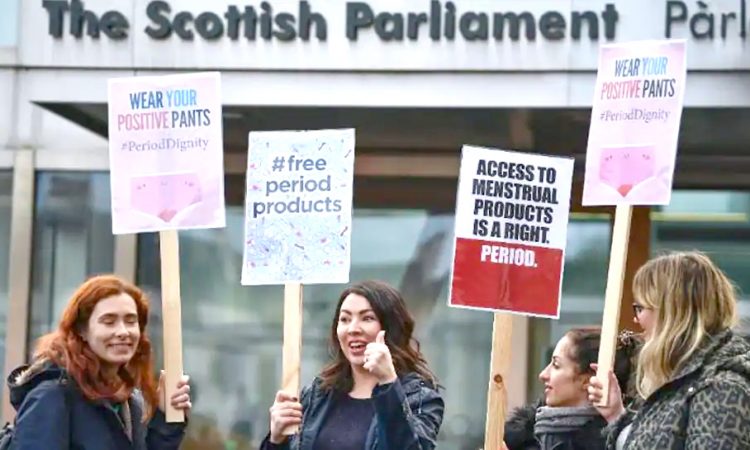 LONDON, November 25: In a historic move, the Scottish Parliament has unanimously passed The Period Products (Free Provision) (Scotland) Act which makes it legally mandatory for all public institutions to provide period products, including tampons and pads to all those who need them.
According to Labour member Monica Lennon, who has been spearheading the grassroots campaign for the past four years and introduced the Bill in April 2019, the goal is to eliminate “period poverty”.
“Thank you to everyone who has campaigned for period dignity and to my MSP colleagues for backing the Bill tonight. A proud day for Scotland and a signal to the world that free universal access to period products can be achieved. #freeperiodproducts Flag of Scotland,” Lennon said in a tweet.
The bill brought forward by Lennon on Tuesday was approved by a majority vote to make items such as tampons and sanitary available to everyone free of cost. The bill was approved by 121 votes to zero after it earned the support of the Scottish government and the other opposition parties.
“The ‘Period Products (Free Provision) (Scotland) Bill was a “practical and progressive” piece of legislation that became all the more important due to coronavirus pandemic,” a report in Skynews online quoted Lennon as saying.
After the passing of the bill, the sanitary products will be made available in public buildings including schools and universities across Scotland. The new rules stipulate that the local authorities are required to ensure the free availability of the products.
The MSP further said that periods don’t stop for pandemics and the work to improve access to essential tampons, pads and reusables have never been more important.
The Labour MP, who is said to be working to tackle period poverty since she was elected in 2016, said, “On the issue of period dignity, I am beyond proud that Scotland is leading the way and we have moved at a fast pace in a short space of time.”
Lennon further said that Scotland will not be the last country to make period poverty history. She said the new rule was a signal to the world that free universal access to period products can be achieved.
It is estimated that the financial cost of the new ruling to the Scottish government could be around GBP 8.7 million a year by 2022. (ZeeNews)