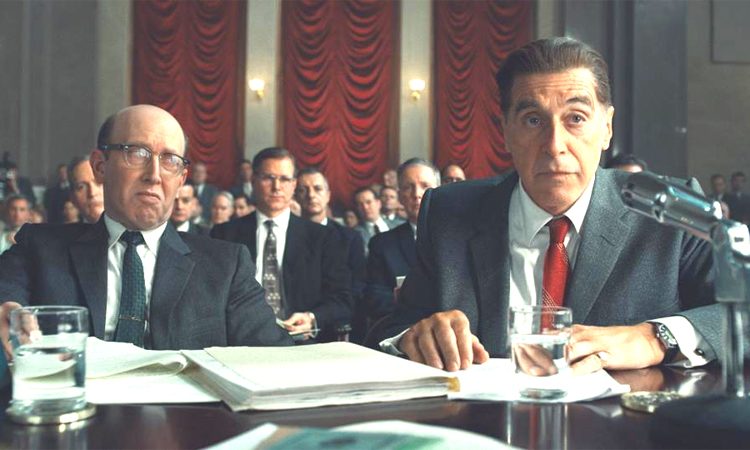 Martin Scorsese’s sprawling crime epic The Irishman has been named best picture by the National Board of Review.
The awards, announced on Tuesday by the National Board of Review, handed Netflix its second major honour in Hollywood’s quickening awards season. On Monday evening, Noah Baumbach’s Marriage Story won best feature at the IFP Gotham Awards, which honour independent film. Both movies are widely expected to eventually reap numerous nominations at the Oscars, with either potentially landing Netflix its first best-picture win.
The Irishman also took best adapted screenplay, for Steven Zaillian’s script, and an icon award for Scorsese, Robert De Niro and Al Pacino.
The board, as it typically does, otherwise spread its awards around to help fill its annual gala with stars. Quentin Tarantino took best director for Once Upon a Time … in Hollywood. Best actress went to Renee Zellweger for her performance as Judy Garland in Judy. Adam Sandler won best actor for Josh and Benny Safdie’s upcoming New York thriller Uncut Gems.
Brad Pitt, widely seen as the Oscar front-runner for his co-leading performance in Once Upon a Time … in Hollywood, won best supporting actor. The National Board of Review also threw its support behind Clint Eastwood’s upcoming docudrama on the 1996 Centennial Olympic Park bombing, Richard Jewell, giving it best supporting actress for Kathy Bates and breakthrough performance for Paul Walter Hauser.
The picks by the National Board of Review, a long-running organization comprised of academics and film professionals, have in recent years seldom lined up with eventual Academy Awards winners. But its best-feature choice last year, Green Book, went on to triumph at the Oscars.
Other awards included: best ensemble to Rian Johnson’s whodunit Knives Out; best screenplay to Uncut Gems; best documentary to Maiden, about a historic all-woman sailing crew; best foreign language film to Bong Joon Ho’s Parasite; best animated film to How to Train Your Dragon: The Hidden World; best directorial debut to Melina Matsoukas (Queen & Slim); and Roger Deakins (1917) for outstanding achievement in cinematography.
The board additionally bestowed its freedom of expression award on both the Death Row drama Just Mercy and the Syrian war documentary For Sama. The awards will be handed out in a ceremony in New York on January 8, hosted by Willie Geist.