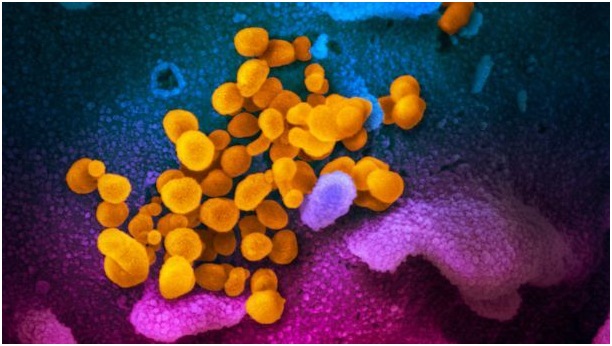 This handout illustration image taken with a scanning electron microscope shows SARS-CoV-2 (yellow) also known as 2019-nCoV, the virus that causes COVID-19 isolated emerging from the surface of cells (blue/pink) cultured in the lab. (Handout/National Institutes of Health/AFP via GettY Images)

Beijing, May 14: Scientists have identified a pair of neutralising antibodies — isolated from a patient who recovered from COVID-19 — that may offer therapeutic benefits, and help design molecule antivirals and vaccine candidates to fight the SARS-CoV-2 virus.
The antibodies identified by the researchers, including those from Chinese Academy of Sciences, bind to the glycoprotein spike of the SARS-CoV-2 virus, blocking the spike’s ability to bind to the human ACE2 receptor and mediate viral entry into host cells.
Preliminary tests of the two antibodies, named B38 and H4, in a mouse model resulted in a reduction of virus titers, the researchers said.
The finding, published in the journal Science, suggests that the antibodies may offer therapeutic benefits — in addition to informing the design of small molecule therapeutics and vaccine candidates to fight COVID-19, they said.
Researcher Yan Wu from Capital Medical University, China and colleagues found that the antibodies can each bind simultaneously to different epitopes on the spike’s receptor binding domain (RBD).
Due to this binding, both antibodies together may confer a stronger neutralising effect than either antibody on its own — a prediction supported by in vitro experiments, they said.
This feature also means that, should one of the viral epitopes mutate in a way that prevents the binding of one of the two antibodies, the other may still retain its neutralising activity, according to the researchers.
By imaging the structure of the viral spike’s RBD bound to B38, the team confirmed that the antibody binds to a subset of the amino acids bound by ACE2, they said.
This, the researchers explained, provides an explanation for why the B38 antibody confers such strong neutralising effects.
They suggest that a “cocktail” containing both antibodies could provide direct therapeutic benefits for COVID-19 patients.
The finding regarding the viral spike epitopes could also aid the development of small molecule antivirals and vaccine candidates to fight the SARS-CoV-2 virus, the researchers added. (PTI)