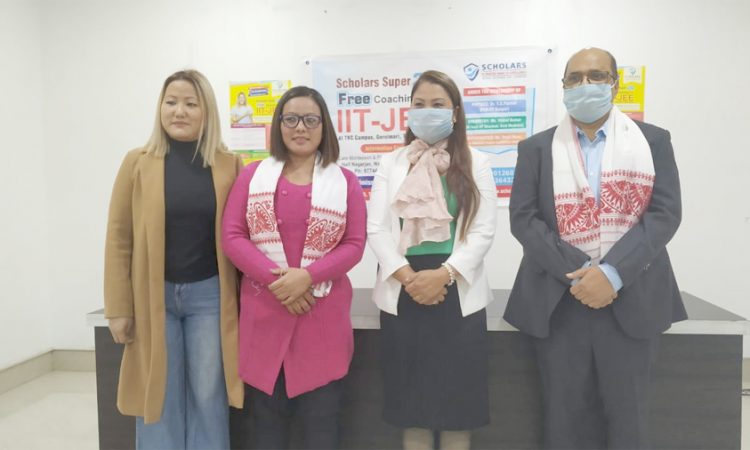 Dimapur, January 14: CSAR Learning Solutions Pvt. Ltd. through its subsidiary “Scholars India” has launched a free coaching programme for IIT-JEE aspirants called ‘Scholars Super 30’ under the mentorship of Dr. Y.S. Parmar (Ph.D in Physics from IIT Kanpur) for the students of Assam, Arunachal Pradesh, and Nagaland.

Sharing more details with the media persons about it here at Four Seasons, Nagarjan Point, Dimapur, Director of the programme, Sanjay Singh said that while this year the focus is only on three states of the region, more states will be explored in the coming year and a centre will also be established in Nagaland.
Presently, the students from Nagaland who would be selected for the programme would have to take the coaching from the Tezpur Campus located at Goroimari (near Air Force Station).
Singh explained that since the programme need to be residential, students opting for it will be accommodated in the educational institutions nearby the campus for their further education, a model, he said they have been replicating in the other parts of the country.
While the coaching under the initiative is free, the students, however, will have to incur the expenditures for the lodgings managed by TKC Auberge which is a known name in managing hostel services for the students.
As the name suggests, only 30 students from each state will be selected for the programme after a written test and personal interview, out of which 50% of the seats have been kept reserved for the SC/ST students. The written test will be objective type and duration for the same will be 90 minutes.
Students appearing Class 10, Class 11, and Class 12 from recognized schools and colleges are eligible to be a part of the programme. According to Singh, students for it have been divided into two batches- one comprising of those appearing in Class 10 and another of those appearing in Class 11 and Cass 12. For the former batch, the duration of coaching would be 18 months while for the latter it is 11 months.
Singh claimed that the programme has been in place since 2002 and over the years it has been able to keep an almost cent percent result.
The registration for the programme is underway both online and offline. For the students of Nagaland, the registration can be done online by visiting scholarsindia.co.in or offline by visiting the information centre located at Edu-Care Montessori & Primary Teachers Training Institute, United Colony (Nagarjan), Ward 20, Dimapur. More information about registration can be availed by contacting 9774445529, 7005040828, 6901260484, and 9436432893.
The syllabus and sample papers for the examination which is scheduled to take place on March 20th can be downloaded from the website.

Singh, who was also accompanied by head of the Nagaland centre, Tsupan, disclosed that the test and interview for the students of Nagaland will be held in the state only.
(Page News Service)

Deepor Beel in Assam to be beautified to attract tourists