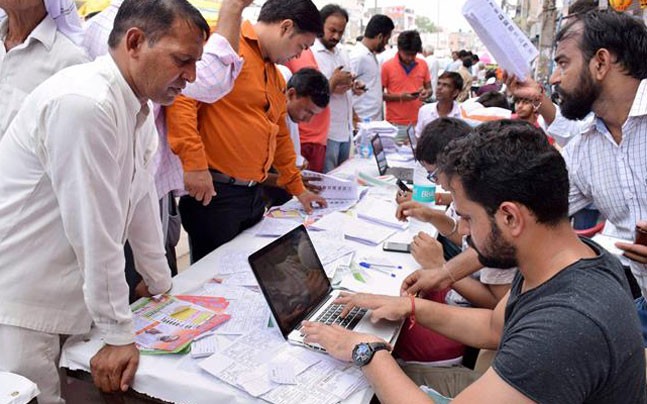 New Delhi, July 1: Crucial issues relating to the publication of final draft of Assam’s National Register of Citizens (NRC) would come up before the Supreme Court tomorrow, days after the NRC state coordinator said it would not be possible to release it as scheduled on June 30 due to floods in state.
The NRC is being prepared to identify illegal migrants in Assam.
A Bench comprising Justices Ranjan Gogoi and Rohinton Fali Nariman, supervising the process related to the work, had earlier ordered that publication of the final draft of the NRC should be completed by June 30 and refused to extend the deadline any further.
However, NRC state coordinator Prateek Hajela on June 28 said the final draft would not be released as scheduled due to the heavy floods in the state’s Barak valley. A plea has also been filed in the apex Court seeking more time to prepare the final draft.
Hajela had said it would not be possible to publish the draft on June 30 as floods have hit Cachar, Karimganj and Hailakandi districts in the Barak valley, besides parts of Karbi Anglong and Hojai.
The current wave of floods in the state has affected more than 5 lakh people in 7 districts. As many as 25 people have also lost their lives in the floods so far.
Assam Chief Minister Sarbananda Sonowal had also recently said that the names of all “genuine Indians” would be incorporated in the list of the state’s citizens.
He had also ruled out the possibility of violence after publication of the NRC, saying adequate forces were deployed across the state to deal with any situation.
On March 27, the apex Court had refused to extend the deadline for the ongoing process of publication of final draft NRC in Assam and directed its publication by June 30.
The first draft NRC for Assam was published in December end as per the top Court’s direction to have the first draft by December 31, 2017.
The first draft of the NRC, a list of the state’s citizens, was published on the intervening night of December 31 and January 1 where names of 1.9 crore people out of the 3.29 crore applicants were incorporated.
Assam, which had faced influx of people from Bangladesh since the early 20th century, is the only state having an NRC, which was first prepared in 1951.
The top Court had earlier said that the claims of those citizens, whose names do not figure in the draft NRC for Assam published by December 31 last year, would be scrutinised and included in the subsequent list, if found genuine.
The NRC of 1951 is being updated for Assam in accordance with the tripartite agreement between the state, the Centre and the influential All Assam Students Union in 2005 as a key issue for implementation of the 1985 Assam Accord.
(PTI)