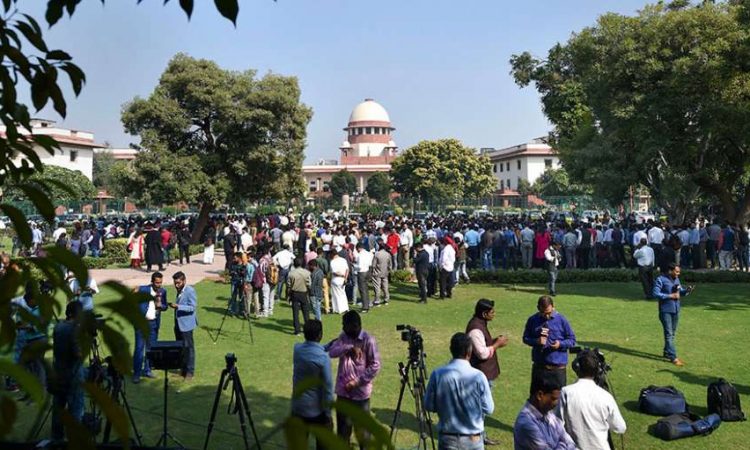 NEW DELHI, JANUARY 22: The Supreme Court on Wednesday made it clear that it will not pass restraint orders on the Citizenship Amendment Act (CAA) or the National Population Register (NPR) or the National Register of Citizens (NRC) without hearing the Centre and thereby allowing the Government to freely implement the laws.
The apex Court, which had issued a notice to the Centre on December 18 on pleas, was hearing a batch of 143 petitions, including those filed by the Indian Union Muslim League (IUML) and Congress leader Jairam Ramesh.
The 3-Judge Bench of the Supreme Court has, meanwhile, granted the Central Government 4 weeks to file a reply in CAA related-matters.
Besides, Chief Justice SA Bobde-led Bench said that Assam and Tripura matters will be clubbed together to be dealt with separately. The top Court asked Senior Advocate Kapil Sibal to assist in identifying these matters. It has also asked the Centre to file a reply in the matter in 2 weeks.
CJI SA Bobde agreed that the challenge to Citizenship Amendment Act will have to be bifurcated in 2 sections – one concerning Tripura and Assam and another one concerning CAA generally.
The observation was made as Senior Sdvocate Vikas Singh insisted for an interim order stating that “demography of Assam could be changed because of the law.” “Half the immigrants in Assam are Bengali Hindus,” Singh argued.
Attorney General KK Venugopal, appearing for the Centre, had insisted that there is no need for an interim order on CAA.
Senior Advocate Kapil Sibal had earlier urged the apex Court to put on hold operation of CAA and postpone the exercise of NPR for the time being. Sibal had suggested that some interim order could be issued as NPR begins in April.
However, the 3-Judge Bench of the apex Court clarified that it will not pass an ex-parte order on CAA.
A 3-Judge Bench will sit in the 5th week for fixing schedule, while a 5-Judge Bench will sit subsequently for interim relief, merit, according to the Supreme Court order.
Meanwhile, the Supreme Court has not referred the matter to a Constitution Bench as of now. However, it showed a strong inclination to do that. It said a 5-Judge Constitution Bench will be set up to hear the matter.

Before concluding today’s hearing on the new citizenship law, the Supreme Court restrained all High Courts from passing any order on CAA until the apex Court finishes deciding the matter.
A 3-Judge Bench led by Chief Justice SA Bobde comprising Justices S Abdul Nazeer and Sanjiv Khanna was hearing the petitions, most of which challenged the constitutional validity of the controversial law.
Protests have erupted across the nation with violence and arson emerging from different parts of Delhi, West Bengal, Uttar Pradesh and the Northeastern states of Assam, Tripura and Manipur.
The campus protests have gained massive support across the nation after Delhi Police tear-gassed students of Jamia Millia Islamia University on Sunday night without any permission from the campus authorities.
Several other violent protests have been across the nation against the contentious law.
According to the new law, members of Hindu, Sikh, Buddhist, Jain, Parsi and Christian communities, who have come from Pakistan, Bangladesh and Afghanistan, till December 31, 2014, facing religious persecution there, will not be treated as illegal immigrants but given Indian citizenship.
The opposition parties have termed the legislation as “unconstitutional” which “is aimed at diverting attention from the burning issues of the common people”.
Those opposing the amended law say it discriminates on the basis of religion and violates the Constitution. They also allege that the CAA, along with the proposed pan-India National Register of Citizens (NRC), is intended to target India’s Muslim community.
However, the Bharatiya Janata Party (BJP)-led Central Government has dismissed the allegations, maintaining that the law is intended to give citizenship to the persecuted people from the 3 neighbouring countries and not take away citizenship from anyone. (Courtesy: TS)