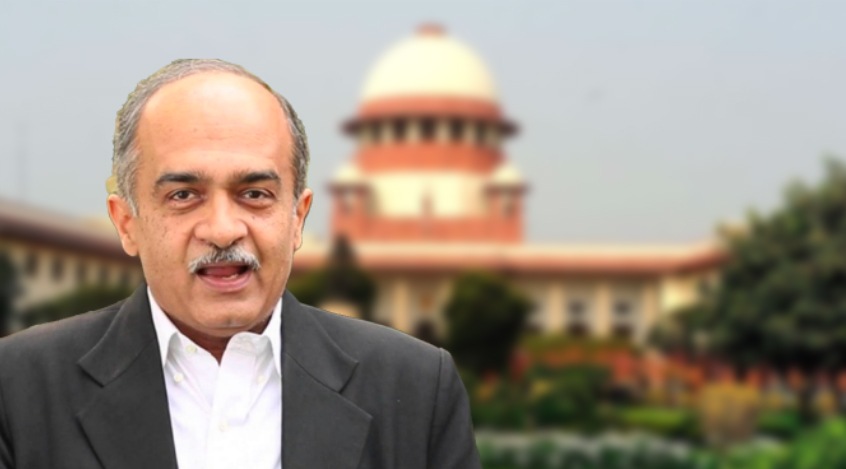 NEW DELHI, AUGUST 25: The Supreme Court on Tuesday reserved its verdict on the quantum of sentence in the 2009 contempt case against Prashant Bhushan for his tweets against CJI SA Bobde and his 4 predecessors and agreed to refer to an “appropriate Bench” the question of conflict between right to free speech and suo motu contempt powers of court in the case against the activist lawyer.
The 3-Judge Bench of the Supreme Court headed by Justice Arun Mishra also deferred the case to September 10.
The contempt case is in connection with Bhushan’s comments on the judiciary during an interview to the Tehelka magazine in 2009.
In its hearing on Tuesday, the top Court observed that it is not only a question of punishment but also faith in the institution that required detailed hearing.
The Bench told senior advocate Rajeev Dhavan, representing Bhushan, that he must ponder that people come to court for relief, and when that faith is shaken then there is a problem.
Senior advocate Kapil Sibal, appearing for journalist Tarun Tejpal, contended before the Bench that people come to court for justice and relief. “We will come and go but the institution exists forever. We must protect the integrity of the institution,” submitted Sibal.
The Bench said let the matter be listed on September 10 before an appropriate Bench by the Chief Justice. “I am short of time. I am demitting office,” Justice Mishra observed, who is scheduled to retire on September 2, citing the matter requires detailed hearing.
“If you are hurting someone, then what is wrong in apologizing,” Justice Mishra said and asked, “For how long the system will suffer all this. I am retiring in a few days. Will it be okay if you or others start attacking me? Why to say you can say anything against retired Judges?”
After an emotional statement by outgoing Judge Arun Mishra, the Court reserved its verdict on the quantum of sentence.
During the hearing, the top Court observed that in this case in addition to the Attorney General, the assistance of some amicus is also required.
Dhavan asked the Bench to issue notice to the Attorney General. “Let us leave this to an appropriate Bench,” Justice Mishra noted. Dhavan argued that the important question is how much of the Court’s free speech jurisprudence could be read into suo moto contempt powers?
Meanwhile, Attorney General (AG) KK Venugopal urged the Supreme Court to forgive Prashant Bhushan and said it was not necessary to punish him.
The AG submitted before the Bench that Bhushan has expressed regret in the 2009 matter and he should be allowed to do the same in this case as well.
The top Court has convicted Bhushan for making derogatory statements against the judiciary in 2 tweets. Bhushan has refused to apologize and said it is his bona fide belief.
Pointing at Bhushan’s response, the Court told the AG that Bhushan’s “court has collapsed” comment was objectionable, but his response to the Court was even more derogatory.
“Isn’t that objectionable,” the Bench queried the AG.
As AG KK Venugopal insisted that the top Court should show statesmanship and not use the powers of contempt, the Bench asked the AG, what is the use of warning to Bhushan who thinks he has not done anything wrong?
Venugopal responded that his response should not be considered.
“How can we not? Everyone is criticizing us that we have not considered his response,” the Bench headed by Justice Arun Mishra said.
When the AG insisted that Bhushan would not do this again. Justice Mishra said: “Let him say this.”
Advocate Prashant Bhushan in his written submissions to the Supreme Court on Monday said there should not be any attempt to coerce him into making an apology and asked the Court to recall its August 14 judgment holding him guilty of contempt of court as similar statements were made by retired Judges and others.
“In the present controversy, similar comments were made by Justices Lokur, Kurian Joseph, AP Shah, Arun Shourie and others in the public domain and were reported by the newspapers and TV. It would follow that they were all in contempt,” Bhushan had said.
Today, the Supreme Court took a 30-minute break from the hearing to allow Prashant Bhushan to think on withdrawing a 100-page statement he submitted on Monday, in which he not only refused to apologise but also said: “The hopes of the people of India vest in this Court to ensure the rule of law and the Constitution and not an untrammeled rule of the executive.”
Reacting to the statement, the Supreme Court said it had expected a different statement. “It was painful to read his reply in justification of his tweets. It was absolutely improper. This is not the way a senior lawyer like Prashant Bhushan with over 30 years of experience should behave. And it is not just him, this has become very common now,” said the court.
On August 20, the Supreme Court gave Prashant Bhushan time till August 24 to submit an “unconditional apology” and asked him to reconsider his defiant statement declining to apologise for his derogatory tweets against the judiciary.
It had, however, rejected Bhushan’s request to defer hearing on his sentencing in 2009 contempt case in which he was held guilty.
The apex Court had initiated suo motu contempt proceedings against Bhushan for publishing 2 tweets, the first tweet, which was posted on June 27 alleged that the last 4 Chief Justices had played a role in the “destruction of democracy” during undeclared “emergency” for last 6 years.
And the second tweet on June 29 allegedly said the present Chief Justice rode a stationary bike at Nagpur while keeping the apex Court in lockdown and denying citizens their right to access to justice. (Courtesy: TS)