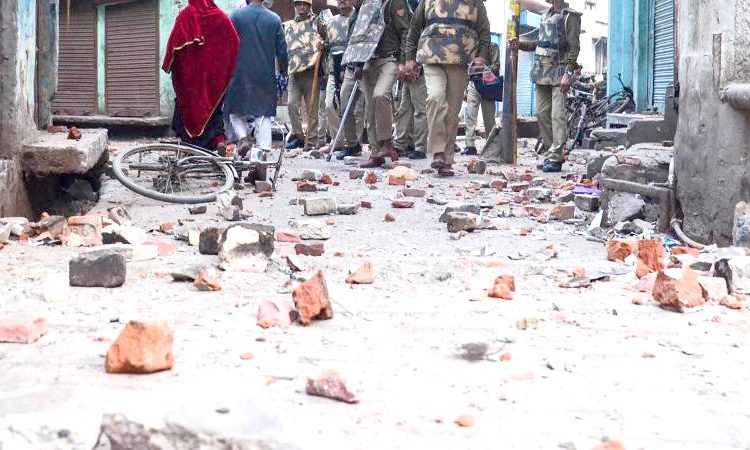 A view of after clashes broke out between anti-CAA protesters and police at Uparkot jama masjid in Aligarh. (File photo| PTI)

New Delhi, July 9: The Supreme Court on Friday asked the Uttar Pradesh government not to take action on earlier notices sent to the alleged protestors by district administration for recovering losses caused by damage to public property during the anti-CAA agitations in the state.

The apex court stated however that the state can take action as per the law and in accordance with new rules.
A bench of Justices D Y Chandrachud and M R Shah said, Don’t take action as per the earlier notices. All action should be taken in accordance with new rules .
Senior additional advocate general Garima Prashad, appearing for Uttar Pradesh, said the state has proceeded since the last date of hearing and has constituted tribunals and framed all the requisite rules.
The bench asked Prasad to file a counter affidavit giving details of rules and tribunals constituted and posted the matter for further hearing after two weeks.
The top court was hearing a plea filed by Parwaiz Arif Titu seeking quashing of notices sent to alleged protestors by district administration for recovering losses caused by damage to public properties during the anti-Citizenship (Amendment) Act (CAA) agitations in Uttar Pradesh and asked the state to respond to it.
The plea has alleged that such notices have been sent in an “arbitrary manner” against a person, who had died six years ago at the age of 94, and also to several others including two people who are aged above 90.
On January 31 last year, the top court had issued notice to the state government and asked it to respond to the plea.
Titu had contended that these notices were based on an Allahabad High Court judgement delivered in 2010 which “is in violation of the guidelines” laid down by the top court in a 2009 verdict, and re-affirmed in a 2018 order.
He submitted that the state government has appointed additional district magistrate to deal with the process of notices for recovering damages for loss of public property during protests against the CAA whereas the guidelines laid down by the apex court stipulated that retired judges should deal with the matter.
The plea has sought stay on these notices claiming they have been sent to persons who have not been booked under any penal provisions and no details of FIR or any criminal offences have been made out against them.
“The contradiction is that while the Supreme Court in 2009 put the onus of assessment of damages and recovery from the accused on high courts of every state, whereas the Allahabad High Court had issued guidelines in 2010 judgement that let the state government undertake these processes to recover damages, which has serious implications,” said the plea, filed through advocate Nilofar Khan.
“The judicial oversight/judicial security is a sort of safety mechanism against arbitrary action. This means that there is every chance that the ruling party in the state could go after its political opponents or others oppose to it to settle scores,” it said.
It also sought a direction to the Uttar Pradesh government to follow the procedure as per the 2009 and 2018 guidelines of the apex court while claiming damages to recover the losses caused to public property during such protests.
The plea sought setting up of an independent judicial inquiry to probe into the incidents which happened during the protests against the amended citizenship act and the National Register of Citizens in Uttar Pradesh, as has been done by the Karnataka High Court.
It claimed that the BJP-led Yogi Adityanath government in Uttar Pradesh is “moving ahead on the chief minister’s promise of avenging loss to public property” by seizing assets of protestors in order to “take revenge for political reasons from one community who is in minority”.
The plea further alleged that around 925 people, who have been arrested so far in connection with the violent protests, may not get bail easily in Uttar Pradesh till they pay up for the losses as they have to be given “conditional bail” only after they deposit the amount.

“The government of Uttar Pradesh and its administration and police are no longer behaving like the arm of a democratic government as it cracked down on protests against the Citizenship Amendment Act, 2019/NRC. The police on the instructions of the Uttar Pradesh administration used disproportionate force and denied public accountability,” it alleged. (PTI)