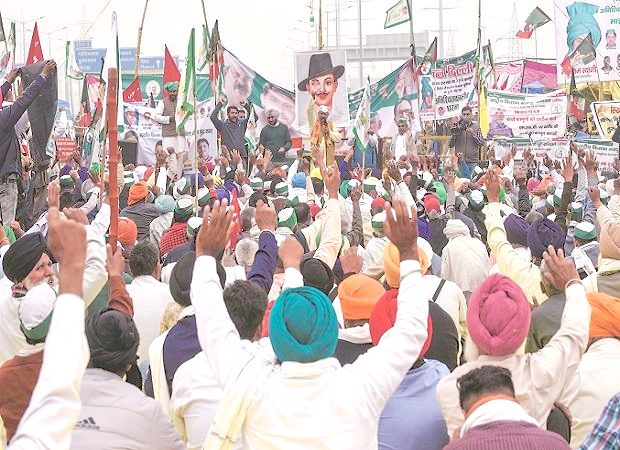 New Delhi, January 7: The Supreme Court Thursday asked the Centre whether the farmers protesting against the new farm laws at Delhi borders are protected against the spread of COVID-19 and said that the guidelines to contain the virus should be followed.
The apex court was hearing a plea seeking various reliefs including CBI probe into the matter related to assembly of people at Anand Vihar Bus Terminal and the Tablighi Jamaat congregation at Nizammudin Markaz in the national capital after the nationwide lockdown was announced last year to contain the pandemic.
You must tell us what is happening. The same problem is going to arise in farmers’ agitation. I do not know if farmers are protected from COVID. So, the same problem is going to arise. It is not that everything is over, said Chief Justice S A Bobde, who was heading the bench which also comprised Justices A S Bopanna and V Ramasubramanian.
The top court asked Solicitor General Tushar Mehta, appearing for the Centre, whether protesting farmers are protected from COVID-19.
Mehta replied, Certainly not .
Mehta said that he will file a report within two weeks on what has been done and what needs to be done.
The plea, filed by advocate Supriya Pandita, has alleged that Delhi police had failed to control the gathering of people at Anand Vihar Bus Terminal last year during the lockdown.
Advocate Om Prakash Parihar, appearing for the petitioner, Thursday told the bench that the police has not said anything about the whereabouts of Nizamuddin Markaz chief Maulana Saad.
The bench told Parihar, Why are you interested in one person? We are on the issue of COVID. Why do you want controversy? We are interested that COVID guidelines should be followed .
The apex court said it is trying to ensure that COVID-19 does not spread and the guidelines are followed.
Issue notice. In the meantime, respondents shall file their reply affidavit, if any, the bench said in its order.
The Centre had on June 5 last year told the top court that probe into assembly of people at Anand Vihar Bus Terminal in east Delhi during nationwide lockdown and the Tablighi Jamaat event is being conducted on a day-to-day basis by Delhi Police and there was no need for CBI investigation.

The Ministry of Home Affairs (MHA) had earlier given the details of steps taken by Delhi Police which is making all efforts to complete the investigation within the time frame to submit the charge sheet in the trial court.
It had told the top court that due to fake media reports and circulation of certain misinformation in the areas of Delhi, thousands of migrants gathered at Anand Vihar Bus terminal and Ghazipur border areas here on March 28, last year.
On the steps taken by Delhi Police, the MHA in its affidavit had said that probe in Markaz matter is being conducted on a day-to- day basis, in accordance with the mandate of law and all efforts are being made to finalize investigation and submit a report under section 173 CrPC (charge sheet) before the trial court in a time bound manner.
The MHA had alleged that Maulana Saad and others had allowed a huge gathering to assemble inside a closed premise, over a protracted period of time, without any semblance of social distances or provision of masks and sanitizers and have caused a situation where a highly infectious disease such as COVID-19 may spread and threaten the lives of inmates.
It had said that a case was lodged against Maulana Saad under various provisions including The Epidemic Disease Act, Disaster Management Act and sections of IPC with crime branch police station and during the investigation of the case, charges under Foreigners Act was also added.
The Ministry had pointed out that there was no negligence or delay in dealing with the Markaz incident and police had on March 21 contacted the authorities of Tablighi Jamaat Headquarters and apprised them of COVID-19 situation and was directed to send the foreigners back to their respective countries and Indians to their native places. (PTI)

COVID-19 Nagaland: Tally at 12,058; Vaccination drive to resume on Monday