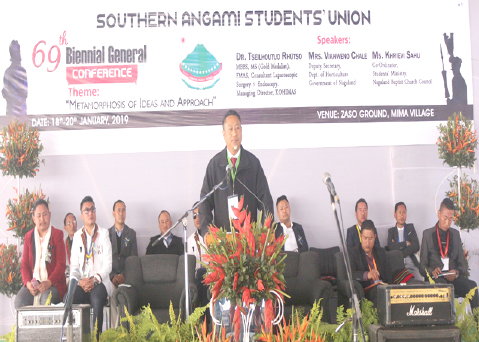 Mima, January 19: The 69th biennial general conference of Southern Angami Students’ Union (SASU) commenced today on the theme “Metamorphosis of ideas and approach” at Zaso ground, Mima village, Kohima.
Addressing the inaugural session, Managing Director of KOHIMAS Dr Tseilhoutuo (Ato) Rhütso encouraged the students’ community to have positive attitude and not just academic excellence. He said as students’ they must not only read history but strive to create history.
Maintaining that the present generation is in a competitive world, he emphasized that education should not only based on bookish knowledge but it should give the employability understanding with skill development.
He encouraged the youngsters saying that failing in competitive exams is not an end in itself but they should look out for other avenues. Instead of merely depending on government jobs, they should have the positive attitude of being self-reliant, he said adding that failure is success delayed and it is not the end while success is also not permanent.
He challenged the students’ community to understand the value of idle time and leisure time and to divide their time accordingly in order to achieve greater heights.
Sharing his life experience of having struggled during his days as student despite having the desire of enjoying with friends, Dr Ato said the success achieved will help in overcoming all the sufferings.
He also called upon them to be agents of change and endeavour to improve the society to make it a place of our own choice.
Angami Students’ Union president Visako Rino the present society is decaying with corruption and it is time for the younger generation to come out with better ideas to transform the society. “As future leaders we have make new approaches with better thoughts,” he said.
Rino also urged upon the students’ community to stop basking on the past glories of the forefathers but to work hard to achieving own positions in the society.
SASU president Ketholeto Anthony Zashümo also exhorted the gathering.
The inaugural session commenced with Pastor of Mima Baptist Church, Medosalhou Rhutsu saying invocation while special numbers were presented by The Noswes and Dieze Sothu.
The day was also marked by business hour and competitions, the result are as follows:
Wrestling: 1st Atuo Tevo, 2nd Rokovituo Lese; Arm wrestling (female): 1st Kevisano Zecho, 2nd Visedenü Rhetso.
In the academic session debate competition was held on the topic “Hornbill festival promotes elitist culture in Nagaland”.
The conference will conclude on Sunday evening with the election of the new team of SASU executives.
(Page News Service)