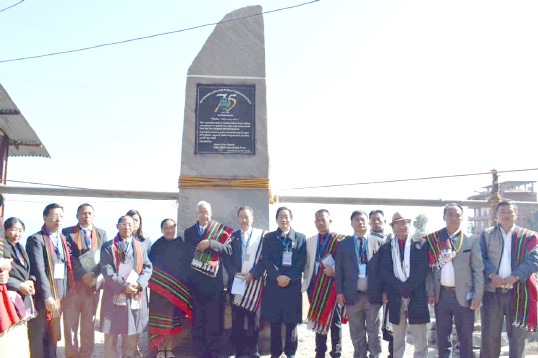 Kohima, December 28: Southern Angami Public Organization (SAPO) today celebrated its Platinum Jubilee under the theme, “Celebrating Ethos” at Jakhama Village, under Kohima district.
Justice Zelre Angami, Judge (Rtd), Gauhati High Court exhorting the gathering said that in the past, any activity, be small or huge was not made or fulfilled through individual calibre but through collective efforts. This, he maintained, was best demonstrated through a just and peace loving community where also religion was common.
He called upon people to live together in harmony as good people.
Referring on the land of the Southern Angami region, he said, we were fortunate to receive premiere education initiated by own people and among others were opportunities through Polytechnique and power supply.
Pointing that the region’s land with good soil, abundance of water and clean air was one that is gifted by God, he said it is imperative to forgo bad deeds and protect the ecosystem and environment of the land for the present and future generation.
Speaking as special guest, MLA Dr. Chotisuh Sazo in his exhortation reminded the people of the Southern Angami region that the Chokri and southern Angamis has always maintained a cordial and friendly relationship since time immemorial. He also accorded gratitude to the people for always extending solidarity to the Chokris.
Chairman, Kohima Village Council, Dr. Neiphi Kire opined that jubilee is an occasion for an in-depth exposition of cultures and traditions- songs & dances, attires and ornaments. While a chance to revisit the past, also to go ahead with renewed hope. Significant to the inception year- 1944, Kire also remarked that the year 1944 was fought the battle of Kohima between the British and Japanese troops has irreparable memories of lives and valuables lost.
Advisor, Youth Resources & Sports, Zale Neikha noting on the essence of the theme called to revisit the practices and cultures of the past where he said our people maintained unity and were self-sufficient and self-reliant. Pondering on the present generation, he also stated that the present generation has become dependent on the market. Zale further challenged the elders to teach younger people on the practices of the past and also called the younger generation to inherit these age-old practices.
Angami Public Organization advisor Kethozhapu Sahu speaking on the inception of the SAPO said that 9 villages in 1934 came together as Japfüphiki. In 1944, the present 13 villages formed the Southern Angami Public Organization. However not recognized by the government, in totality, the Southern Angami region has around 17 villages, he later added.
Cultural items that were presented during the jubilee were Tati Pfhe (folk song) by Tsaraho (Never grow old) group, Khuzama village, Ukrü Tsali by Jakhama Village, Viswema village, Sakhabama (Helim/folk dance), Mima Village and Kigwema Village. Southern Angami Cultural Society also presented special song.
Earlier, Retired Director, Treasuries & Accounts Daso Paphino and Ex-MLA Medokul Spohie chaired the programmes during the monolith inauguration and formal programme respectively. SAPO President Vimezhol Theyo, President, SAPO delivered presidential address.
(Page News Service)