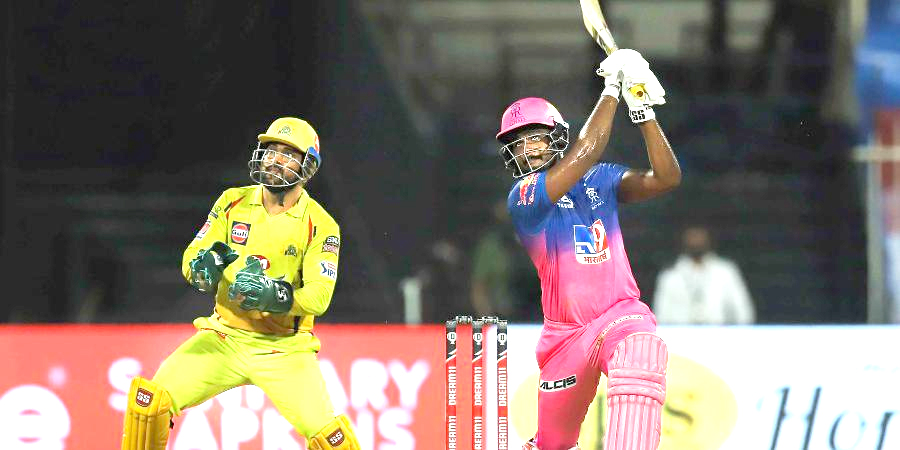 SHARJAH, September 23: Short boundaries and a flat pitch at Sharjah Cricket Stadium meant a run-feast was on the cards for Tuesday’s clash between Chennai Super Kings and Rajasthan Royals. Electing to bowl first in their second game, Chennai were punished by Steve Smith & Co, leaving them with an improbable 217 runs to chase.
Even though MS Dhoni’s men are known for chasing down massive totals, it didn’t quite happen on Tuesday.
The three-time champions lost by 16 runs to endure their first defeat of the 13th edition.
On a flat deck, both sides hit 33 sixes which is five more than what was witnessed before Tuesday.
Even if one considers the dew factor, chasing down Rajasthan’s 216/7 was too big an ask for Chennai after they lost first four wickets for 77 inside nine overs.
Faf du Plessis top-scored with 72 runs (off 37 balls) but it wasn’t enough to take the team home. Dhoni’s unbeaten 29 off 17 balls was too little too late.
For Rajasthan, leg-spinner Rahul Tewatia starred with three wickets.
Though Smith & Co came into the contest as underdogs, they made their intentions clear from the beginning.
Sans their first-choice opener Jos Buttler and all-rounder Ben Stokes, Smith took the responsibility to open the innings, for the first time in T20s.
Sanju Samson and the skipper made sure they utilised the conditions to the hilt, by putting on 121 runs for the second wicket. While Samson scored a 32-ball 74, Smith hit 69 off 47.
Jofra Archer’s cameo of 27 in eight balls at the end ensured Rajasthan crossed the 200-mark. By beating heavyweights Chennai, Rajasthan have made a statement early in the league.
Brief scores: RR 216/7 in 20 ovs (Samson 74, Smith 69; Sam 3/33) bt CSK 200/6 in 20 ovs (Du Plessis 72; Tewatia 3/37).
It’s Rajasthan Royals again and MS Dhoni gets upset with umpire reversing his dismissal decision
Mahendra Singh Dhoni briefly seemed upset during Chennai Super Kings’ IPL match against Rajasthan Royals after one of the wrong decisions by the on-field umpire was rightfully changed after a referral to the third umpire.
It was a horrible decision and Curran couldn’t refer after Rahul Tewatia wasted the only DRS.
However, after consultation with square leg umpire Vineet Kulkarni, Shamshuddin understanding his error in judgement referred it to TV umpire.
The replays showed that neither Curran edged the ball no did Dhoni catch it cleanly as it bounced before entering his gloves.
The decision was overturned but the veteran skipper looked very unhappy and was seen giving Shamshuddin a piece of his mind as he went for a referral after giving a decision.
Incidentally, in Jaipur last year, Dhoni had lost his cool with domestic umpire Ulhas Gandhe for a waist-high full toss which wasn’t adjudged no ball.
In fact, Dhoni violated players’ code of conduct by entering the ground and angrily charging at the umpire.
While his anger was a lot toned down during this incident but whether domestic match referee VN Kutty takes a note of his conduct is there to be seen.
It could either be umpires’ report or match referee can himself take note if he deems necessary.
It was in the 18th over of the Royals’ innings and Deepak Chahar bowling to Tom Curran got a caught behind decision from umpire C Shamshuddin. (Agencies)