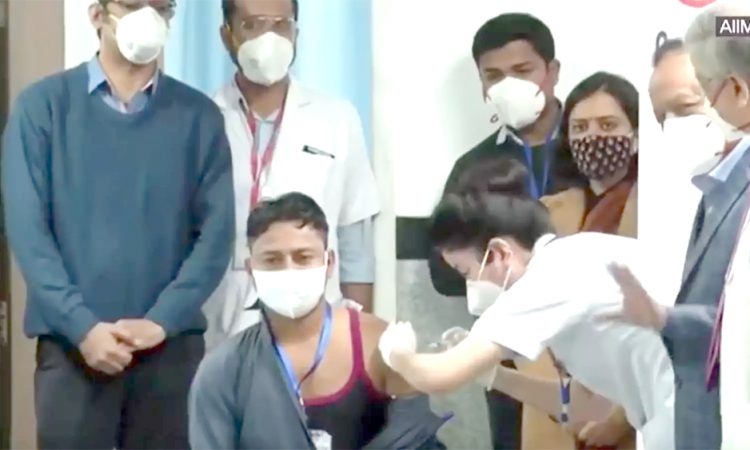 New Delhi, January 16: Manish Kumar, a sanitation worker, became the first person in the Indian capital to be administered a COVID-19 vaccine during the launch of the nationwide vaccination programme at the All India Institute of Medical Sciences in the presence of Union Health Minister Harsh Vardhan on Saturday.

As people around applauded, AIIMS Director Randeep Guleria also received a shot of the vaccine followed by NITI Aayog member V K Paul.
Kumar, who works at the AIIMS along with his mother Laxmi Rani, said he was not at all nervous and was “proud of getting the vaccine”.
Vardhan said the two vaccines — the indigenous Covaxin from Bharat Biotech and Covishield from the Oxford/AstraZeneca stable — were a ‘sanjivani’, life infusing, in the fight against the pandemic.
“These vaccines are our ‘sanjivini’ in our fight against the pandemic. We have won the battle against polio and now we have reached the decisive phase of winning the war against COVID. I want to congratulate all frontline workers on this day,” he told reporters shortly after the vaccine shots were administered.
Meanwhile, a security guard was the first to get the Covaxin shot at RML hospital and a security guard was also the first to get the jab at Safdarjung hospital.
Several doctors, nurses and other heathcare workers also got the shots in these hospitals.
Earlier in the day, Prime Minister Narendra Modi launched the world’s largest vaccination drive against the pandemic.
Delhi Chief Minister Arvind Kejriwal, who inspected the COVID-19 vaccination campaign at the Lok Nayak Jai Prakash Narayan (LNJP) Hospital here and interacted with some health workers who received the shot, also urged people not to believe in rumours and listen to experts who say COVID-19 vaccines are safe.
Noting that it is a historic day, Vardhan said, “We have been blessed by the prime minister all through our fight against coronavirus. It’s the largest coronavirus vaccination programme in world,” he said.
“We have been able to put up a valiant fight against the disease during the last one year. Adopting a preemptive and proactive strategy has resulted in a very good performance by India. We have probably the lowest fatality rate in the world,” Vardhan said.
Asserting the safety of the coronavirus vaccines — Covishield and Covaxin — Harsh Vardhan said, “The experts gave their approval after seeing the results. There is no difference between vaccines. Both are equally safe and effective.”
He said, “At times when rumours are being spread, I hope the media will spread the correct information and this move will help in the fight against the disease,” the health minister said.
Vardhan also said the Phase 3 trials of Bharat Biotech’s Covaxin is ongoing.
“It has been subjected to ample and adequate scrutiny,” he said.
“There is no need for any fear. We have to be absolutely fearless, and sure of the safety of this vaccine and also have to be patient…Everyone has to wait for his/her turn,” the health minister said.
According to the government, the shots will be offered first to an estimated one crore healthcare workers and around two crore frontline workers, and then to persons above 50 years of age, followed by persons younger than 50 years of age with associated comorbidities.
The cost of vaccination of healthcare and frontline workers will be borne by the central government.
Thanking all, including doctors, nurses, healthcare staff, security personnel and journalists, who have been at the frontline in the fight against the pandemic, Vardhan said they ensured India reaches the stage where vaccines are delivered to the people.
Speaking to reporters after taking the jab, Paul urged people to “embrace the vaccine”.
“I believe that this is a great vaccine. I have taken Covaxin. Embrace the vaccine. Both the vaccines that the government has authorised are safe and immunogenic. I request you to please embrace it as in this way you will help your family and your community,” he said.
On concerns over the efficacy of the vaccine, he said there is no evidence to suggest it is unsafe and these are false rumours and narratives.
Vardhan also visited Sir Ganga Ram Hospital to inspect the Covishield vaccination programme at the facility after AIIMS.
“India has launched today the biggest vaccination programme. We should be proud of India’s vaccination programme and I assure the people of the efficacy of the vaccination.
“I have visited Sir Ganga Ram Hospital many times during the peak of COVID-19 crisis. That is the reason I am visiting this hospital today as Sir Ganga Ram Hospital has been in the forefront during the fight with COVID-19. People should not play politics in this important vaccination programme,” a hospital statement quoting him said. (PTI) 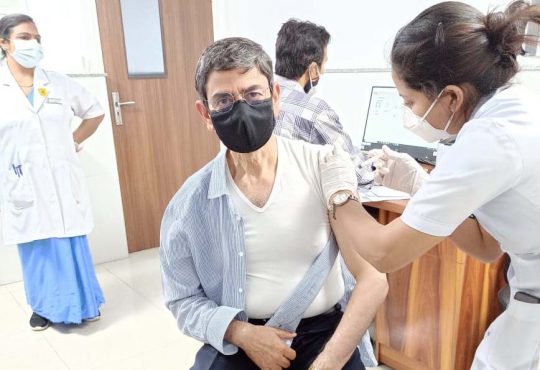