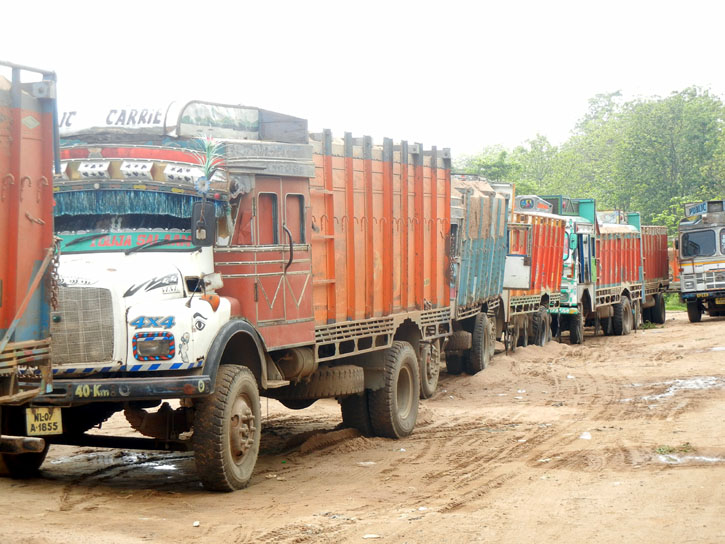 Dimapur, June 1: State government’s failure to resolve the issue of ‘taxation’ on sand laden trucks entering Nagaland has once again forced the trucks to remain in the borders of Assam. As of Friday afternoon, more than 70 trucks loaded with sand were stranded at Dillai Gate after they refused to pay taxes to the Government Department’s Check Gates.
The Sand Stockists and Suppliers’ Union (SSSUD) had sought clarification from the state Government as who is authorized to collect taxes on sand imported from Assam even as the Department of Geology & Mining, Forest Department and environment, forest and climate change (EF&CC) has been collecting taxes from sand laden trucks.
The SSSUD disclosed that Geology & Mining Department is issuing money receipt, but the Forest Department is issuing token in small piece of paper at both New Field and Dillai Check Gates.
Talking to media persons, an official of Geology & Mining Department said that as per Nagaland Nagaland Rules of Executive Business 2016, the Department has been authorized as administrative authority of mineral concession and development of minerals in the state.
He said the state of Nagaland has enacted the Nagaland (ownership and transfer of land and its resources) Act 1990 and under Section 17 of the aforesaid Act, the Nagaland Minor Mineral Concession Rules 2004 was framed and accordingly, the Department is granting mining lease and quarry permit and levying royalty under the aforesaid Act and Rules.
He said the dispute between Forest and Geology & Mining Department was already resolved in a joint meeting on October 28, 2017 and accordingly, a clear administrative order was issued with the approval of Chief Minister under the present PDA Government on April 2 this year.
The department is collecting royalty as per the rate prescribed under schedule 1 of NMMCR 2004 against issue of money receipt, he said.
“We don’t know what Forest Department is doing, because it’s a universal truth that mineral is mining produce and not forest produce,” he said when asked as to how the Forest Department was collecting taxes.
When media persons reached the Forest Department’s Check Gate, the concerned official was not available for comment despite waiting for him for several minutes.
Secretary of SSSUD, Nito Sumi said that the trucks would ply only when their demands are fulfilled by the government.
“If the Government does not clarify within 5 days, they would go for indefinite bandh,” he said.
It was learnt that the Geology & Mining Department had accepted the request of the SSSUD not to collect taxes from the sand laden trucks, but the Forest Department refused warning that they would stop the trucks, if they don’t pay the tax.
(Page News Service)