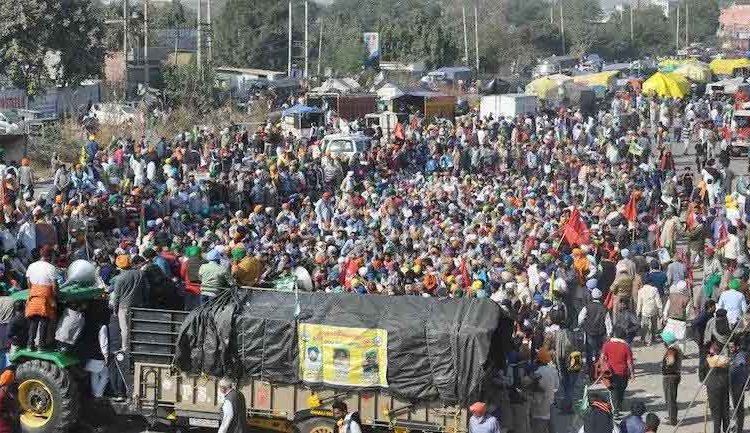 New Delhi, May 15: Samyukta Kisan Morcha, an umbrella body of over 40 farmer unions, on Saturday announced that it will observe May 26 as black day’, marking six months of their protest at Delhi’s borders against the Centre’s three farm laws.

In a virtual press conference, farmer leader Balbir Singh Rajewal appealed to people to raise black flags at their houses, vehicles and shops on May 26 to protest against the contentious farm legislations.
“On May 26, we will complete six months of this protest and it also happens to mark seven years since PM Modi formed the government. We will observe it as black day,” Rajewal said.
A large number of farmers reached Delhi’s borders on November 26 after facing water cannons and police barriers as part of their “Delhi Chalo” march against the Centre’s farm laws.
In the following months, thousands of farmers from across the country joined the protest at Tikri, Singhu and Ghazipur borders around the national capital.
Rajewal appealed to people to support the call for observing black day’ on May 26.
“We appeal to people of the country and also Punjab to hang black flags at their house, shops, trucks and other vehicles. We will also burn effigies of (PM) Narendra Modi as a form of protest,” he added.
He said that the government has not heard the farmers’ demand to repeal the three agri laws and “with increasing prices of fertilisers, diesel and petrol, the farming business is not possible”.
SKM appealed to mass organisations, trade unions, traders’ and transporters’ organisations to hold black flag demonstrations’ in support of the farmers’ demands.
The farmers’ outfit has also decided to launch “Mission UP and Uttarakhand” as part of its demand to “repeal three black laws, enact legal guarantee for MSP and punish the BJP”.
This shall include rallying of all farmers’ forces from across the country. The programme will be launched with participation of all protesting farmer organisations from all over India and it shall be observed throughout these states,” the SKM said in a statement.
Days after the alleged sexual assault of a woman activist at Tikri border protest site, who later died due to COVID-19 at a private hospital in Haryana, the SKM said that it will soon announce names of its “Mahila Sraksha Samitis”.
“Within two days, SKM will announce names of its Mahila Suraksha Samitis at all border protest sites which will look into measures to ensure safety and security of women participating in the movement,” it said.

Hundreds of farmers have been camping at Delhi’s borders since November 2020 demanding that the Farmers’ Produce Trade and Commerce (Promotion and Facilitation) Act, 2020, Farmers’ (Empowerment and Protection) Agreement on Price Assurance and Farm Services Act, 2020 and the Essential Commodities (Amendment) Act, 2020 be rolled back and a new law made to guarantee minimum support price for crops.
However, the government, which has held multiple rounds of formal dialogue with the protestors, has maintained that the laws are pro-farmer. (PTI)