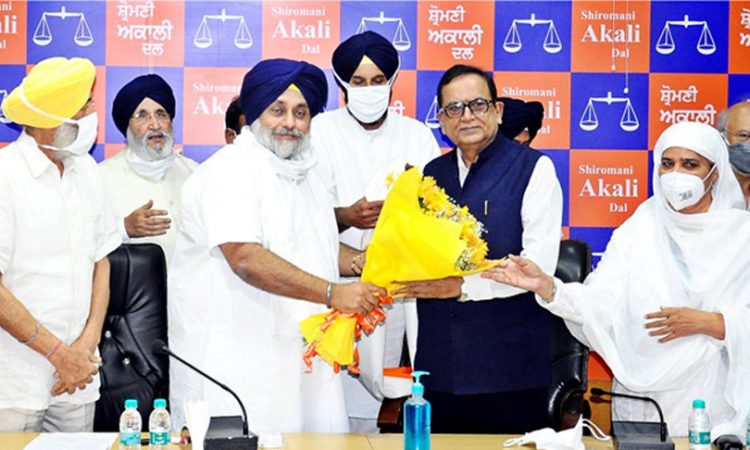 Chandigarh, June 12: The Shiromani Akali Dal and the Bahujan Samaj Party formed an alliance on Saturday for the 2022 Punjab Assembly elections, coming together after a gap of 25 years.
Under the tie-up, the BSP will fight 20 of the 117 Assembly seats while the rest will be contested by the SAD, said Akali Dal chief Sukhbir Singh Badal while announcing the alliance here.

The SAD-BSP alliance had contested the 1996 Lok Sabha polls together and won 11 out of 13 seats in Punjab. While three seats were won by the BSP and the rest were won by the SAD.
BSP chief Mayawati dubbed the alliance between the SAD and her party as a “new political and social initiative” which will usher in progress and prosperity in Punjab.
SAD stalwart and former CM Parkash Singh Badal described the formation of the SAD-BSP alliance as “the beginning of a secular, federal democratic revolution in the state and the country for a total socio-economic and political revamp of polity”.
Punjab has 31.94 per cent Dalit population, mainly concentration in Jalandhar, Hoshiarpur, Nawanshahr and Kapurthala districts.
The border state has the highest percentage of Scheduled Castes population in the country.
At a joint press conference with BSP’s general secretary Satish Chandra Mishra, Sukhbir Badal said, Today is a new day in Punjab’s politics, a historic day…a day of big turn in Punjab’s politics.”
The BSP will contest seven seats in Malwa, five in Majha and eight in Doaba regions of Punjab, said Badal, adding that the two parties will soon form a coordination committee to jointly chalk out various programmes ahead of the polls.

The seats which the BSP will contest are Kartarpur Sahib, Jalandhar-West, Jalandhar-North, Phagwara, Hoshiarpur, Tanda, Dasuya, Chamkaur Sahib, Bassi Pathana, Mehal Kalan, Nawanshahr, Ludhiana North, Sujanpur, Bhoa, Pathankot, Mohali, Amritsar North, Amritsar Central, Payal and Anandpur Sahib.
The leaders of the two outfits claimed that the alliance will “sweep” the 2022 polls and oust the “non-performing” Congress from power.
The SAD earlier had a tie-up with the BJP and the Badal-led party walked out of the NDA over the farm laws issue last year.
The BJP used to contest 23 seats under its alliance with the SAD.
About the new alliance, Mishra said, “Today is a historic day. The BSP, which is a national party, has entered into an alliance with Punjab’s strongest party SAD.”
“This alliance will continue forever now,” Mishra added.
This tie-up has been revived after two parties were together 25 years ago, said Badal and Mishra.
“Each BSP worker supports and welcomes this alliance. The SAD and the BSP are pro-farmer parties, who have worked for uplift of the Dalits, labourers and weaker sections,” Mishra said.
Sukhbir Badal said he wants to thank Mayawati for playing “an instrumental role in stitching this alliance”.
“The two parties share similar ideologies as both have always fought to uphold the rights of poor, Dalits and weaker sections, Badal said who was sitting in front of a banner that read “Soch Vikas Di, Nawen Punjab Di”.
Later, during an interaction with the media, the former Punjab deputy CM said the BJP will not be able to open its account in the Assembly elections.
To a question whether Parkash Singh Badal will contest the upcoming elections, the SAD chief said he would like him to fight.
Sukhbir Badal also spelled out several schemes and initiatives started for the Scheduled Castes and other weaker sections during their regime.
He also touched upon the relations which the SAD patriarch and BSP founder the late Kanshi Ram shared.
He said he was happy that the pact has been revived.

Badal also lashed out at the ruling Congress, alleging people want to get rid its regime, which has “looted Punjab”.
“Mission of our alliance is to get rid of this non-performing regime. Our alliance will form the next government and once again ensure peace, brotherhood, communal harmony and overall development of Punjab,” he said.
Hitting out at CM Amarinder Singh, he said, “We don’t need to say anything about this chief minister, who has lost trust of his own cabinet colleagues, who are now speaking against him.”
Referring to the Centre’s contentious farm laws, Mishra said, “A conspiracy being hatched to snatch land from farmers. We have strongly raised this issue even in the Parliament.”
The BSP leader said the SAD had been opposing the farm ordinances and when the BJP-led dispensation did not listen they decided to walk out of the alliance.
The BSP has a considerable hold over Dalits in the Doaba belt. Punjab is also the birthplace of the party’s founder Kashi Ram, who belonged to Rupnagar district.

The BSP was demanding more seats but the SAD managed to convince it with 20 seats, sources said.
The SAD had already announced that it would appoint a Dalit as deputy chief minister if voted to power.
The BSP had contested the 2019 Lok Sabha polls as part of the Punjab Democratic Alliance, comprising the Punjabi Ekta Party, Lok Insaf Party and the Left.
The BSP had contested the 2017 Assembly elections but could not win any seat. (PTI)